First off, Happy New Year to everyone. Although this blog is only a few months old, it’s received some fantastic support in 2014, and I’d like to thank everyone that has supported this blog in any way, be it commenting, favouriting, retweeting or following. It really does mean a lot to me. I hope to bring you more quality tactics based FM content throughout 2015 and onwards.

Anyway moving on. I’ve reached the Austrian mid-season break in the 16/17 season, so it’s time to update you on where we stand with Sturm. The last update on this save outlined my transfers beginning the season, and I think it came across how excited I was for the next season with the players I’d signed. I was expecting big things after signing Dibon, Wydra, Spendlhofer (now here permanently), Ligeon, Sallahi and Gregoritsch. I also covered a new 3-5-2 formation I was looking at trying alongside the 4-1-4-1, particularly in the games against Salzburg. I ended up betraying my own ideas in the Salzburg game, but I’ll cover that later on.

What I did do however, was make a massive mistake with my signings, particularly upfront. Sometimes I become very blinkered with signings, and just decide I want ____ player. That’s all well and good, but it caused me to miss the fact that Gregoritsch is extremely injury prone. When he plays, he does well, but I can never keep him in for a consistent run of games because he’ll be crocked for a couple of weeks or so. On top of that, my star striker Manu Molina is also very injury prone. He’s brilliant when fit, but it’s just not often enough. Even Kevin Pirker (who I brought up from the youth team last season) is fairly injury prone, at times leaving me with only Alar (who is very hot and cold upfront) to play at striker.

Naturally, I realised I had to make a signing. As you will have seen in my previous post on this blog, I couldn’t find anyone who quite fit what I wanted for the money I had available. I through the question out on Twitter, and the Austria expert @Shrewnaldo suggested ‘Super Kev’ Kevin Friesenbichler.

Now, as you saw in the previous article, the 4-4-2 worked gloriously against Sevilla and Antonio Conte’s 3-5-2. Ominously, its next test was against Salzburg, and well, it failed hideously. Salzburg switched formations before the game, using a 4-1-4-1 against us, and they completely dominated midfield. Lovric and Wydra were chasing shadows as our aggressive pressing was bypassed constantly. At half time we were 1-0 down, and were damn lucky it was only that. The players received a bollocking to pep them up, but I knew the result would have been my fault if we’d lost. It was at this point I changed the tactics of the side, and once again, stumbled upon something that has taken us forward in the league and now looks to be our shape moving forward. We recovered in the second half, absolutely dominated Salzburg, and were unlucky not to win the game after coming back to 1-1. 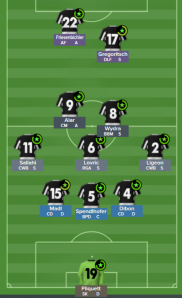 Yep, it’s a 3-5-2. Why is this working now when it didn’t before? Largely because our injuries have reduced, meaning I can actually field two(ish) strikers, but also because I’ve been far braver with my role selection.

It’s no coincidence I’d read @RTHerringbone’s fantastic article on his move from 4-1-4-1 to 3-5-2 days before making this switch, and this article identified where I felt I was going wrong with my 3-5-2, particularly in midfield. It’s changed from DM-D, RPM-S and a CW to a RGA-S, BBM-S and a CW. Clearly far more attacking, and the whole setup is better as a result. I’ve also been trying out the CWB-S role for the wing backs, and I absolutely love them. They gradually move up with the play, rather than immediately running forward like CWB-A’s do. They still end up in the same positions, but it’s a far more patient build up.

The move to 3-5-2 really is a logical one for us. We aren’t blessed with gifted wingers, but we have some outstanding wing backs in Ligeon and Sallahi, who are the 2nd and 3rd best players in the league respectively by average rating.

It also allowed me to increase Lovric’s influence within the team. Previously, he’s been our super dependable DM-D in the 4-1-4-1, covering space, making tackles and keeping the ball, making short simple passes to our higher midfielders. That’s all well and good, but Lovric has developed to a point where I now feel I can put him in a deeper creative role, and allow him to control the game, in the same way Xabi Alonso does for Bayern. He’s absolutely dominated games from the Regista role, and has gone from strength to strength. When he isn’t available, Wydra has also proved himself to be more than capable in the role.

But most importantly, how has Super Kev performed, the man who this tactic is designed to get the best out of?

11 goals in 14 league appearances for an average rating of 7.48, the best in the league. I’ll take that. All of that for 275k when he was transfer listed at Benfica. Bargain of the century.

So, how’s the league going this year? Well, pretty well again. We’ve been beaten though, and finished with a record of 56 games unbeaten. It wasn’t even Salzburg, Rapid or FAK that finally ended our run, but Austria Klagenfurt, who completely dumbfounded me. It was just after a European match, and we were comfortably beaten.

Still, I’m very happy to be 4 points clear of Salzburg at this point of the season. It would have been 6 points, but we drew our last game before the break, and Salzburg won theirs. Apart from that they’ve been relatively poor this season and have already lost as many games as they did in the first season of this save. Their squad size is just ridiculous, and they bought Marcel Buchel, who they didn’t even need, a very talented Austrian who I was looking at to play Box to Box for us. If he begins to waste away at Salzburg, I’ll make a move for him.

You can clearly see where our strength is, with only 10 goals allowed. Even before the move to a Back 3 we were solid defensively, but now with the trio of Dibon – Spendlhofer – Piesinger, we just don’t let anyone through. We press from the front, and most of the time, we force the opposition to kick it long, allowing our CB’s to restart the play. Dibon and Spendlhofer particularly are very good on the ball, and Piesinger does the basic stuff very well when he has the ball, either getting it to Spendlhofer or to Lovric.

So, how are we doing in Europe? Did we manage to make it to the CL groups? Unfortunately not. We got all the way to Celtic, who knocked us out, just like last year in the Europa League. They’ve become my bogey team in Europe, and I’m determined to beat them next time we face them. Despite that, we went straight into the Europa League, and were drawn with Sevilla, Trabzonspor and Club Brugge. Rather impressively, we stayed unbeaten throughout the group, showing how much progress we’ve made to finish top of the group. We’ve gone through to the next round and been drawn with AZ Alkmaar, and I’m fairly confident that we can make it past them.

So, results wise everything’s been rosy. Outside of that, it really hasn’t been, and it’s something about FM15 that has annoyed me. In order to balance the books a little and make a small amount of money, I sold a young player called Phillipp Seidl who was never going to achieve the potential he looked like he might have had at the start of the save. He wasn’t even close to being called up for the first team, but this infuriated Manu Molina so much that he said that the squad had to be strengthened, just after I had signed Dibon, Wydra, Spendlhofer et al. Naturally, I didn’t have the cash to further strengthen the squad, but neither did I want to, and I wasn’t going to buy a player I didn’t need and risk the financial stability of the club just to please Molina. Well, he didn’t like this, and eventually I had half the squad with very low morale. Then, I had players complaining about low ‘squad harmony’ even though it was rated at 80% by the game! On top of this, there’s largely nothing you can do to fix this, and some very good FM players have been sacked this year because of the reactions of one player. I then tried a squad meeting, which seemed to do absolutely nothing. I then decided enough was enough, and started shipping Molina around to other clubs. Sion came in with an offer of £2M, and whilst I could probably have got more money for him, he’d become such a cancer in the club that I took the money. The problems still continued though, and it was only when I dropped Molina to the reserve squad that the players finally picked up. He’s gone in two weeks, and as far as I’m concerned, it can’t be soon enough.

On top of that, I received a £4M big from PSG for my best regen Gerald Simma. I never felt he was that promising, and bit PSG’s hand off. I also allowed Marko Stankovic to leave for 33k when he began complaining about not getting first team football. I wanted to keep him around and have him retire at the club, but at this point in his career, he was no more than a backup option. He wanted first team football, and with squad morale in mind, I allowed him to leave for almost nothing. I’d made almost £6.1M from three players, but now absolutely needed a DLF to play next to Super Kev in the 3-5-2. Looking for the attributes I wanted, I found Nils Quaschner one of the many talented players languishing at Red Bull Salzburg.

Quaschner certainly wasn’t cheap, and cost me £2.2M with instalments, but I needed a quality player to play in the DLF role. Alar plays well there at times, but it’s largely very inconsistent. Quaschner becomes my first German signing of this save, and most importantly isn’t injury prone. On top of that, he also looks like he can play an AF role too, so will work as a lone striker. His all round attributes also bring the 4-1-4-1 back into play, giving us that tactical flexibility again. Now we can play 4-1-4-1 and 3-5-2 with ease. I’m also looking at developing a formation with a Number 10 at some point, because Alar was peerless when playing there when we used the diamond. I also love Number 10’s.

I’ll update the save again at the end of the season. I’m hoping to make a real impact in Europe this season, so hopefully we can make it past AZ. Thanks for reading, and if you have any questions, please feel free to ask.