Well, I’ve reached the end of December in the first season of the Eibar save, so it’s time to update you on how we’re doing. This save has certainly been interesting so far.

First off, there’s something I forgot to mention in the last update, and that’s transfers (my mistake for getting caught up talking about the 4-5-1-0). I initially tried to ditch some of the strikers, but none of them either wanted to leave, or were wanted by other clubs, so for now, they’ve been retrained as temporary backups, and will be moved on at the end of the season. Obviously, we’re playing a bunch of midfielders in the 4-5-1-0, and we needed a bit more quality in the CM-D role, so I signed Aitor Monroy from Cluj in Romania for a fee of 60k, an absolutely tiny fee for a very versatile player, who has everything I need in the CM-D role. He tackles well, passes well, and has the ‘plays short simple passes’ and ‘marks tightly’ PPMs. On top of that, he’s decent going forward so towards the end of the game, I’ll usually sub either the CM-A or the BBM off, move Monroy to one of those roles and bring on a more defensive CM-D to make sure we close the game out. I was given a budget of £2M, but that’s all I’ve spent, preferring to analyse the squad in the first season and then make decisions regarding signings.

Tactically, we’re still using the 4-5-1-0 (as I will throughout most of this save, as I want to see how far I can take it and how flexible it is as our reputation grows) with no further tweaks from the previous update. I’m at the point now where I’m very happy with the tactic, and I will link a download of this tactic at the end of this post, along with a little bit of analysis about what makes it work.

So, how are we doing in La Liga?

Yeah, 4th. Even I’m surprised when I look at that table. I promise you that I’m not cheating the game.

We’ve been utterly brilliant so far, and so far we sit top of the ‘rest’. Obviously, Barca, Atleti and Real are having their own mini league up top, and the rest compete for the spots that are left.

Our strength has been in our defensive work. Although our defensive record doesn’t look great in comparison to some other teams, with 20 goals conceded, it’s worth noting we conceded 3 each in our first two games against Sociedad and Atletico, and conceded 4 against Barca and Real. So we’ve conceded 14 of our 20 goals in 4 games, two of which were when the team was still learning the tactic, and the other 2 are against the top teams in Spain. I can’t complain really.

I don’t expect this to continue, and I’m sure we’ll drop down soon, but for now, being in a Champions League spot is just ridiculous.

When you look at our fixtures, you can see just how good our defensive work has been. 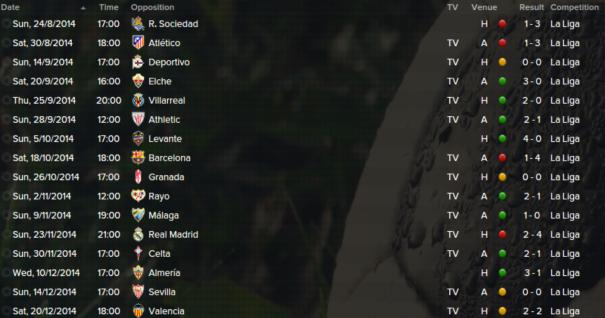 Clearly, we didn’t start the season well with losses against Socieded and Atletico, but the draw against Deportivo was a sign of progress and the 3-0 win against Elche that I analysed was the real turning point, where I felt the team really understood the tactic, and I’d plugged the correct players into it. The lineup has remained largely the same from that game, barring injuries and form. From that Elche game we went on a great run, beating Villarreal at home, Bilbao at the San Mames and Levante 4-0 at home in a ridiculously easy game. 4 games, 1 goal conceded and 11 goals scored. Then we hit the Barca roadblock and were soundly beaten 4-1, but after the game the run continued and we drew with Granada (also having a great season) beat Vallodolid and beat Malaga. Again, 3 games, 1 goal conceded, 3 goals scored. Not quite so fluent going forward this time, but just as stingy in defence. The run continued after being beaten by Real, and in some really tough games against Sevilla and Valencia, we defended, defended and defended, and came out with two fantastic draws.

The amount of clean sheets in those fixtures reflects our defensive prowess, and we lead the league in clean sheets. We also have the most carded player in the league, but that’s a by product of our focus on defending first. We’ve developed a reputation for fouling in the media, which I couldn’t care less about. We’re embracing being the Wimbledon of La Liga. Except, we actually play lovely football going forward to go with the strong, stern defence.

For a team that was expected to ‘fight bravely against relegation’ I think we’re doing fairly well.

So, how have we fared in the Copa Del Rey?

Well, we’ve only played one round, and we rather easily made it through against Cordoba. The tie was either side of big matches against Sevilla and Valencia in the league so I severely rotated the side for the 2nd leg, and we were very lucky to scrape through. The draw for the next round put us against Barca, so it’s extremely likely that that’s our cup run over. Still, the cup is secondary to our newfound ambitions in the league.

The unbelievable success of the team is entirely down to the prowess of the 4-5-1-0. I’ve already done an article on it, but I’d like to show a few more images that illustrate why it’s so effective.

Here you can see the most important aspect of the tactic – how we defend. This tactic is unashamedly defensive, and I love it. We defend en block, and retain our shape. We do press, but it isn’t frantic, and instead focus on restricting the space and time the opposition has and trying to force a long ball which our defenders can cut out.

You can see how strong the shape is. Although Villarreal have got 3 men forward, these are easily covered by our defenders, and only a difficult long through ball can threaten us. Their central midfield are completely out of the game, and our flat midfield 5 are controlling the space.

This kind of defending is something that I see a lot. It’s come unstuck against Barca and Real, but they’ve got world class players who are much better than we are. Teams like Atletico and Valencia have really struggled to break us down.

I think this image illustrates how vital the switch of the right midfielder has been following Guido’s review. Previously, we just had a solid defence, but now, we have a solid defence and are lethal going forward. The majority of our goals are scored following fast, vertical moves that pull the opposition defence out of shape, leading to simple tap ins.

Against teams with higher reputations, we’re more than happy to concede possession. For example, in the 2-1 win against Athletic Bilbao at the San Mames, we had 38% of the ball. There’s more than one way to play Football Manager, and this is certainly a viable one. Conversely, against teams of a similar or smaller stature, we can have more possession, but we’re never going to be a team that has over 60%. We’re fast and vertical, and therefore as a result, if we don’t score, we lose the ball. It’s for this exact reason I find our attacks so good to watch in the ME, because the goals are rarely boring.

Here’s an example of the shape we end up in, and as you can see, it’s pretty much a 4-3-3 shape. As @MerryGuido said in his review of this tactic, the manipulation of player roles allows you to create all manner of different shapes. The CM-D fills the DM strata, and the wingers get forward to support the Treq. The AMR certainly gets forward quicker than the ML, but the ML provides a lot of assists for the side, with the AMR there as the primary goalscorer.

I really do believe that this tactic is one of the best you’ll find for relegation threatened teams. You can download it here. If you have any questions about the tactic itself, please feel free to ask me.

I’ll be updating the save again at the end of the season. Hopefully we can keep this form going, but I absolutely expect us to slide down the table. I’ll still be happy with a mid-table finish, so anything above that is a bonus. Either way, it will take a complete collapse for us to be relegated now. As always, if you have any questions, please feel free to ask, and thank you for reading.