People have been fairly critical of the ‘Target Man’ role this year on FM15. By and large, the main criticism has been that the role induces West Ham levels (though not this season) of direct football. In laymans terms, it’s been said that the game automatically thinks that your Target Man is Andy Carroll, and that you are Graham Taylor’s Watford, and will take any opportunity to hoof the ball up to him. Somewhat irritatingly, this can be at the detriment of your team instructions. I lose count of the amount of times I read people complaining about direct football (that they don’t want) despite asking their team to ‘retain possession’ and ‘work ball into box’. I loved the Target Man role on FM14 (it was a crucial part of my Defensive 4-1-2-2-1), but as a result of the reports I’ve heard, I’ve avoided it on FM15.

So, how can we get around this on FM15? Well, this role I’ve had in mind is extremely influenced by Zlatan Ibrahimovic. Yes, he’s a Target Man type player, but he’s far more than. He’s strong, good at holding the ball up, but he’s also very creative, mobile, and can set up his team mates outside of the classic Target Man cliches like ‘flick ons’ and ‘one-twos’. He’s a classically talented footballer. In Football Manager terms, a mix between a Target Man, and crucially a Deep-Lying Forward. This idea actually spawned out of some of the stats I saw when I was testing the 4-5-1 for my previous article. If you go back and see, you will notice I put Kevin Friesenbichler (an uncreative player, who was strong and fast) at DLF-S, with the responsibility of dropping deep and feeding the ball to the onrushing players in the midfield 5. Surely this wouldn’t work right?

Well, yeah it kinda did. Friesenbichler attempted 76 passes (the most in the team), completed 58 of them for a percentage of 76.3% and 4 of those passes were key passes. I also noticed that in the DLF role, Friesenbichler played much like how I would want a Target Man to, receiving the ball to feet, and moving it on to the onrushing midfielders. Perfect. Super Kev was so effective in this role, that I felt it could easily be converted into a Target Man like role, but a more mobile version, one that used the strengths of players like Friesenbichler, that are strong, fast and mobile.

So, how could I tweak a DLF-S to create this Mobile Targetman?

Well, here’s the instructions I’m using on the left. Now, I want the Mobile Targetman to drop deep like a normal DLF-S, but I don’t want him to hold onto the ball for too long. I want him to drop deep, collect the ball, and quickly move it on to an onrushing midfielder. As a result, ‘dribble less’ was a no brainer. This should ensure that he moves the ball on quickly, and that when he receives the ball, he’s actually quite static. So that’s the static element of the classic Target Man play sorted, but I don’t want this role to just be a classic Target Man. I want him to move laterally over the pitch, combining with all the onrushing midfielders in the team, particularly the Central Winger. As a result I’ve asked him to ‘roam from position’ and ‘move into channels’ to ensure that he stays mobile, and moves laterally around the pitch, moving into areas where he can play quick wall passes, before then turning and joining the attack.

Here’s some classic Target Man play from the DLF-S, supporting my theory that not only is it an alternative to the TM-S, but it might actually be the better option in FM15. Here, the team hasn’t gone direct to the Mobile Targetman, but has worked the ball up the field into this position, and then moves the ball into Friesenbichler with his back to goal in a very dangerous position. From here, he has a couple of options, showing this is not a one dimensional role. He can take the ball and turn and shoot (as he did a few times in the match) or he can try and play someone else in. He decides on the pass in red, causing the defender to lunge in and giving away a penalty, which Friesenbichler converts.

This hold up play is extremely consistent as well. Those of you that have used the DLF-S role in FM15 will have noticed it before and taken it as granted, but with the right roles around it, it’s basically a very effective Target Man and focal point for attacks. Again, here the ball has been moved up to Super Kev by Schnaderbeck. He doesn’t dribble, but instead turns and looks for the pass forward. The Mobile Targetman thrives with runners moving past him. Here, he plays the pass in red and the keeper saves the shot, but the threat is there and we’re looking like scoring again. Everything is going through the Mobile Targetman.

The Mobile Targetman won’t just stay central as well. He’s not a great static lump playing up there. He moves around laterally, and here he’s taken up a position towards the left of the penalty area and is now in a position to play in 3 people, all of whom are making runs towards a similar area. You can see the amount of purple shirts that are being sucked in by the positioning of the Mobile Targetman, creating a lot of space centrally, that we can then try to exploit.

Getting to players to move laterally has always been a difficult task on Football Manager. Usually you have to utilise marking, or in the olden days you’d ask them to ‘hug the touchline’ in order to force them a bit wider than their usual position. However, the Mobile Targetman doesn’t have any of these issues. He will move out wide (usually left with Friesenbichler) and combine with the wide players. Here, he’s moved wide and collected the ball from Sallahi the left winger, and is now in a position to play a quick wall pass into the Central Winger Schnaderbeck before himself turning and joining the attack as it rushes forward, utilising his pace and power. You can also imagine the sheer amount of central space that is left when the Mobile Targetman vacates that area. It’s the classic False 9/Strikerless scenario where the defenders have no idea who to mark, and usually end up making a mistake in their positioning.

Here’s another example of why the Mobile Targetman can be so effective. Here’s he’s drifted over to the left again and we’ve worked the ball into him. There’s no passes on centrally and he switches the angle of attack, moving the play back to the Wide Playmaker Sallahi, who then plays our left back in behind the defence and we’re now in a position to score, with Friesenbichler now free to turn and go for a header from the cross. It’s very basic football, using him as the wall to play off and rebound to create angle for attacks, but it’s also very effective. By not allowing him to dribble, we ensure that this ball movement is swift, keeping the defence off balance.

This is exactly the kind of movement that I want from the Mobile Targetman. He’s vacated his central position and moved out to the left in order to help the build up. Our left midfielder Sallahi plays the blue pass into Friesenbichler (who has drawn in two defenders), and he quickly plays the red pass for our left back Klem. In one pass we can now get in behind their defence. This rebound type of passing off the Mobile Targetman is very common, and it allows us to draw in defenders, play quick passes and change the angle of attack at will. 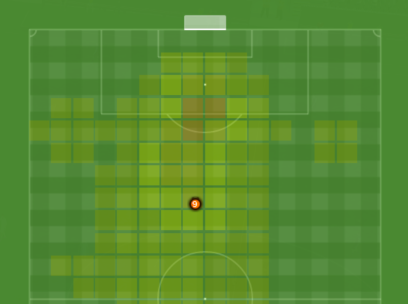 Here you can see the sheer mobility of the Mobile Targetman. He’s covered a lot of area centrally, and spends a lot of time on the edge of the box, but you can also see that he’s moving into the channels (particularly the left) as I’ve asked him to. This movement is extremely difficult for the opposition defence to cope with, especially when a fast player such as Friesenbichler then turns and runs at the defence from those positions.

Friesenbichler’s passes also show quite how much he moves around the pitch. It’s interesting to see that he’s moving out to the left a lot more than the right, perhaps affected by the fact that he’s left footed. You can see there’s a fair amount of backwards passes, but that’s exactly what I want – quick passes to the onrushing midfielders. Despite this, there’s still some forward passes thrown in there, showing that the Mobile Targetman can still be a threat in terms of keeping the defence honest and stretching them vertically.

This is the kind of performance that you’ll see from the Mobile Targetman. He hasn’t passed the ball as much as much as when he was a standard DLF-S, but his passing percentage is sky high and he’s made 6 key passes, a ridiculous statistic for someone who’s basically there to move laterally, stretch the defence and make passes to our marauding midfielders. It certainly seems to me to be a fantastic alternative to the TM-S role. It won’t force your team to be unnecessarily direct, he’ll be far more mobile, and he’ll also have an added creative side (even if like Friesenbichler, he only has 9 for vision).

This is certainly going to be a role that I use going forward on FM15, and a role that combines beautifully with the movement of the Central Winger. I honestly think it’s a much better option than the classic Target Man. Thank you for reading, and as always, should you have any questions, please feel free to ask either here or on my Twitter (@JLAspey).