Well, I’ve now played up until the end of the pre-season, so I think it’s time to update you all on how things are going in the Bradford City save. Well, it’s been a Summer of change at Bradford. Not only did we get promoted from League One to the Championship by winning the division, but my Summer transfers did not go as I had planned, or expected. As a result, things are a lot different at Bradford to how they were when I took over.

In the last update, I said that we needed a striker and a defender at minimum in the transfer window. I wanted a ‘goalscoring’ striker to support workhorse Jon Stead, and a faster (ideally ball playing) centre back to partner Rory McArdle in the Back 4. I also wanted those players to be young, and inject some energy into the (sometimes) lethargic side. This was a very sound plan, plugging the holes and weaknesses in the squad, whilst retaining the loan players that had been useful from the previous season. This did not happen. Instead, it was better.

Firstly, Jon Stead is a money grabber. He wanted over 6k in wages to sign with us permanently, and although he played well last season (scoring 21 goals), I was not willing (or able) to pay that much for a 32 year old. As I said in the previous update, I will be loyal to players until they are loyal to me, but I was not willing to pay that much for Stead. This left me needing 2 strikers. I immediately went looking for the goalscoring striker, figuring I could replace Stead fairly easily, but the finisher was badly needed. Secondly, I decided against keeping some of the loan players. Francois Zoko and Gary MacKenzie (as well as Stead) were allowed to leave, along with Aaron McLean and Jason Kennedy leaving on free transfers. Furthermore, James Meredith was sold, approaching the end of his contract for a measly £11.25k to Coventry.

After that, it was time to go shopping. 2 strikers, and a centre back.

After much deliberation, I decided on Welshman Tom Bradshaw from League One Walsall for £800k. My scouts really do not rate him for some unknown reason (they instead much prefer the bumbling lump that is James Hanson), but I have faith that he will be the striker that we’ve been missing. He’s got good stats in all the classic striker areas and he’s still young, with plenty of time to develop. He’s played well in pre-season, and hopefully should carry on his form into the season proper.

Then it was time to replace Stead, and as you can see, I went for a player that is nothing like Jon Stead. I’ve wanted a quick, nippy creative type to play upfront, and I see Campbell becoming this player. At only 20, he’s young with plenty of room to develop. He cost less wages than Stead, so it’s an upgrade in every possible area. I’ve got the creative striker that I wanted originally, and a younger more dynamic player. He only cost £325k from Newcastle, a fee that I think will be minuscule in comparison to his eventual value. He’s also English, inkeeping with the transfer ethos of this save. 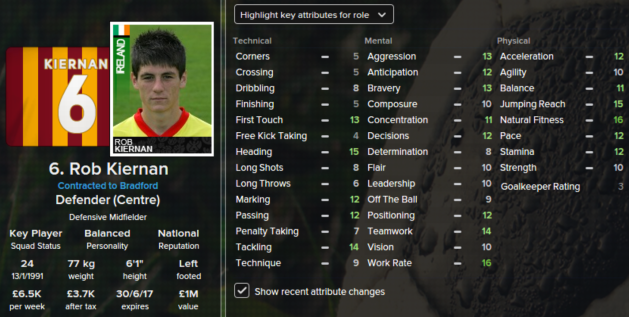 Moving on to the centre back, and I signed Irishman Rob Kiernan who was transfer listed at Wigan for £825k, a fee that I think is a bargain. He’s got some pace, is good in the air, and is more than capable of keeping the ball on the deck and helping us play it out from the back, something I felt we lacked last season with McArdle and MacKenzie playing there. Again, he’s still young with time to develop and he should be solid at centre back for us. He also seems to be developing a good partnership with McArdle through pre-season as the covering Ball Playing Defender.

After that, I was happy with the signings I’d made. I’d signed two very good strikers, and a defender who I felt was a massive upgrade, and allowed me to play the Back 4 that I like to play, with a ‘stopper’ and a covering ball player. However, I then looked at the squad and realised that James Hanson was now our backup striker should anything happen to Campbell or Bradshaw, and I wasn’t having that. Hanson is absolutely useless, and isn’t making it past this season. The only reason I haven’t sold him is that a.) no-one wants him and b.) he’s favoured personnel at the club. So, I went out with my chequebook, and decided to buy a third striker…. 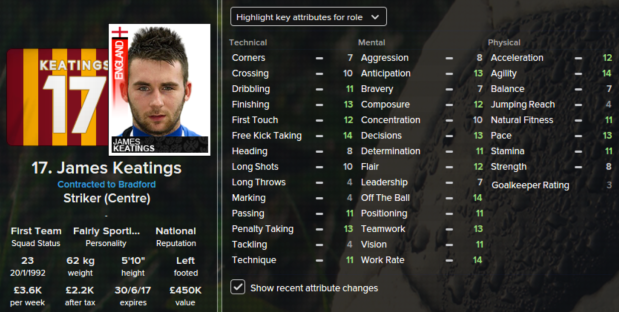 I signed James Keatings from Hearts for a frankly ridiculous £145k. He’d averaged over 7.00 in his season at Hearts, so I had faith that this would be a good signing. It leaves me with a selection dilemma of course, and in my 4-4-2 I have to leave one of them out, but I’m settling on a system of rotation until I can find a system that allows me to play all 3. Keeping them rotating also seem like a smart option. If for some reason one of them doesn’t play well and takes time to bed into the squad, I’ve got another option that can come in and take his spot. Coming out of pre-season, Bradshaw and Campbell are the first choice strikers, but I’ll still rotate them throughout the season as I see potential in Keatings. I’m not adverse to developing a 3 striker system though as time goes on.

I won’t give much information tactically at this point, but I’m still sticking with the 4-4-2, although I’m now trying to develop it a bit more. I’ve changed the Box to Box Midfielder into an AP-S, and it seems to be giving Billy Knott much more influence. It’s not showing up in his average rating, but he’s passing the ball well and showing a good range. I’m also changing the strike partnership around, as the DF-S/AF-A combo no longer fits the players we have. I’m currently trying a Treq/AF combination, with Campbell as the Treq and Bradshaw as the AF. This is very much subject to change though, and I’m still experimenting. I’ve also kicked the mentality up to ‘attacking’ as I want to expand the style this season. Last season, our tempo felt somewhat laboured, and we weren’t as aggressive as I’d like us to be, and the move to ‘attacking’ seems to have rectified this in pre-season. It’s also made our pressing much more effective, something that’s nice to see.

Things haven’t all been rosy though. Last year’s Player Of The Year (and favoured personnel at the club) Mark Yeates wants to leave to join Bristol City (who apparently are a much larger team

than we are), so I’ll be getting shot of him as soon as I can find a replacement. Again, I will be loyal to players until they aren’t loyal to me. We’re also not in wonderful shape financially. We’re slightly above the wage budget, and only have £172k in the bank thanks to my Summer spree. This balance isn’t helped by the lack of sellable assets I inherited, and I’m not willing to lose my best players in order to balance the books ahead of the Championship season. It’s a very Brian Clough-esque move, but I’ve spent to secure survival, rather than balancing the books, and losing my best players and ensuring relegation. The media already thinks we’re going down, but that’s not going to happen. I think we’re more than good enough for this division.

I did try to sell Frenchman Christopher Routis (the only non-Home Nations player left in the squad) and had agreed a fee of 450k, but he refused the wages they offered him. Still, he provides decent cover at centre back, so will be useful this season. I’m not 100% sure he’ll be staying past that. I also think the time is coming up when I can allow myself a few foreign signings. We’re almost entirely Home Nation based now, so I’m not breaking with the transfer ideology of the save.

Fixture wise, there isn’t much to discuss from pre-season, and I don’t hold extensive pre-seasons. We had 3 easy wins against easy opposition, before holding a friendly against our new affiliate Manchester United, losing 3-1. Bradshaw has played well in all of these matches, so I’m hopeful he can continue this form into the new season, and continue the partnership he and Campbell seem to have struck up.

I’ll update again at the end of December, hopefully not in the relegation zone and doing well in the Championship. With the cash I’ve splashed (£2.14M) we should be more than capable of doing well in the Championship. As always, thank you for reading, and if you have any questions please feel free to ask in the comments section, or on Twitter (@JLAspey).