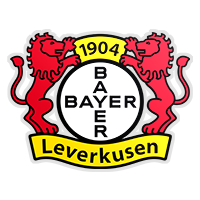 So, we’ve reached the end of the third season of the Bayer Leverkusen save, and this is probably the fastest I have ever played FM. I’m usually criminally slow, taking a couple of months to play just one season, but I’m enjoying this save so much and enjoying writing about it that I’m getting through it faster than ever before. So it’s time to update once again, and were we able to recreate the epic highs of last season, where we won the Bundesliga, DFB Pokal and Champions League?

Well I’m hardly going to ruin that right now, but I will say that no matter what, I do consider this to be a successful season, one that has absolutely confirmed Leverkusen’s status as a top club in Europe. Still, this is by no means the end of the save, and I’m planning on taking things even further next season, including perhaps another tactical change. So, how did we finish in the Bundesliga? 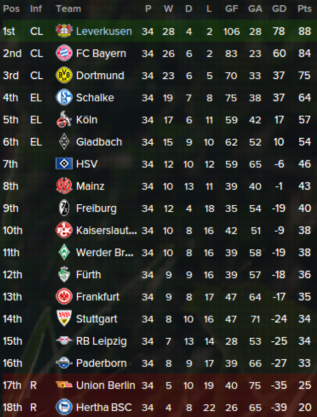 The Three-Peat. Champions of Germany three times in a row. We didn’t make it easy this time, stumbling out of the blocks and playing some shocking football, but once the diamond really settled in, we were unstoppable. We only suffered one more loss in the season, an abysmal 2-1 defeat to Red Bull Leipzig (just enforcing my hatred of everything Red Bull) when they scored in the 87th minute.

Bayern slipped more times than I expected them to, and they really let us in, especially considering our two games in hand. Eventually we finished with a 4 point gap, a gap which really doesn’t show how close the league was. For example, when we played Bayern in the second fixture, it finished 4-4. We led 3-0, then they came back to 3-3 in the space of a torrid 5 minutes. We then look the lead again, before Bayern equalised at the death. The draw was more than acceptable for us, being the ones with the games in hand, but I still love beating Bayern. We haven’t done it that many times in this save though and I’d like to get to a point where we don’t have to worry about facing them. We don’t tend to get beaten by them, but we don’t seem to beat them that often either.

You can see that the diamond has altered the style of our team a little bit this year. Our defence has been still good with only 28 goals conceded, but that’s not as stingy as last year with 8 more goals conceded. However, we’ve scored more than last season, ending with a Bundesliga record (breaking Bayern’s record from last season) of 106 goals. You can see the sheer amount of goals we’ve scored since the winter break. The amount of 3, 4 or 5 goal wins is astounding. Whilst the Bundesliga win might not be as dominant as the unbeaten season last year, it’s still pretty impressive, and 4 points is a fairly comfortable gap. I expect Bayern to come back strong next season though. They’ve now sacked manager Diego Simeone, with Arsenal boss Gerardo ‘Tata’ Martino the bookies’ favourite for the job. Winning the Bundesliga is now something I expect us to do though, and we had bigger fish to fry again. Before that though, there’s the matter of the DFB Pokal. Can we win two in a row?

Well, we did it again, but it was closer this time, with a much more difficult run to the final. After the Lippstadt demolition job, only Bochum in the quarter finals weren’t Bundesliga opposition. With both the Bundesliga and the Champions League to consider, I used weaker lineups all the way through until we met Dortmund in the semis, scraping through with a 1-0 win at Signal Iduna Park. Predictably, we faced Bayern in the final, and drew 2-2 after 90 minutes, coming back from 2 goals down thanks to big goals from big match players Vener and Isa. We finished off the stunning comeback in a penalty shootout, to win our second straight DFB Pokal. 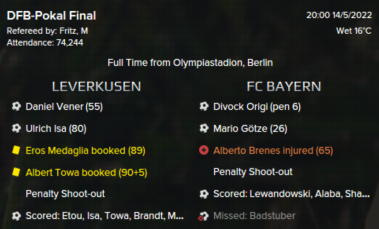 That’s now 5 trophies in total for the year. Supercup, European Super Cup, Club World Championship, Bundesliga and DFB Pokal. So, can we make it 6 with a second straight Champions League triumph?

Not to be totally predictable, but yes we did. After a very shaky 0-0 draw against Benfica in the first leg of the 1st Knockout round, we demolished them at home 4-0 to easily make our way through to the quarters, where we drew Juventus, the team we’d faced and effortlessly beaten in the groups last year. As a result, I really wasn’t worried by Juve, and rightfully so, with us winning a ridiculous 8-1 on aggregate. I still felt like we were avoiding all the ‘big boys’ of Europe up until this point (which I didn’t want) until we drew Barca in the semis, still with Messi, Suarez, Neymar et al. That’s more like it. A huge 1-0 win at the Nou Camp put us in the driving seat for the second leg, and an epic 2-1 at the BayArena win put us through to another Champions League final, where we would play Arsenal at Old Trafford, and therefore Francis Mbiyavanga, the Number 10 I’ve been after since the beginning of last season. He no longer wants to sign for Leverkusen, so it was time to stuff Arsenal, and show Mbiyavanga what he’s missing out on…

Well, we didn’t stuff them in the end, drawing 1-1 after extra time (with Ramsey scoring early and Thiago being injured 5 minutes in), and going through to another penalty shoot out in a cup final. Again, we won on penalties, and won our second straight Champions League. It may not be as dominant as the first one, but it’s still the Champions League, and therefore a 6 trophy haul for the season. I’ll take that after the changes that the club has gone through this season. 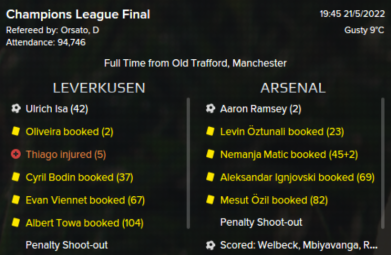 So, 6 trophies in one season. That’s as good a season as I can remember having on Football Manager in terms of trophies won. We literally won everything we entered. It wasn’t as dominant as last season, or nearly as convincing in finals, but at the end of the day we were the victors. Supercup, European Super Cup, Club World Championship, Bundesliga, DFB Pokal and the Champions League. Top of the mountain.

As is usual in the end of season updates, I’m going to do a top 3 players of the year. This year it’s a bit strange given the comings and goings that occurred in the winter transfer window, but these are undoutbedly our best 3 players this season.

This might be considered an odd choice, given the fact that Viennet only joined in the winter transfer window, joining from Saint Etienne £17.25M. At this time, I felt I might have overpaid for him, but couldn’t have been more wrong. He’s a £20M+ player. He made 20 appearances in the second half of the season, averaging 7.82, good for the second best rating at the club. He’s been so good that he’s pushed Jose Luis Gaya out of the Number 1 spot at left back, and Viennet will be one of the first names on the teamsheet next season. As a result, I’m considering selling Gaya, knowing that he’s 27 now, and at optimum selling age. 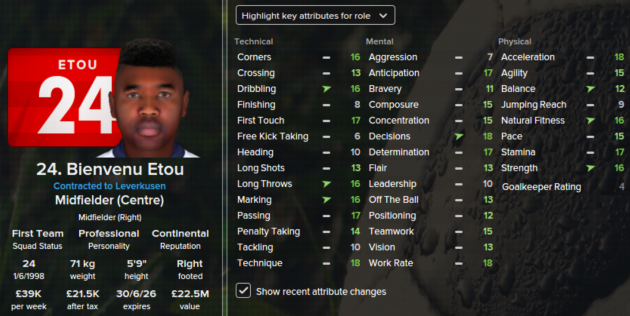 Etou was just brilliant. He controlled the midfield in a way that Tielemans never did, and for much less money. He may be less traditionally creative than Tielemans, but he’s a fantastic, composed playmaker who always make the correct choice. He doesn’t rush the pass forward, and keeps the tempo of the side going. Absolutely the metronome to which we play to. Probably the second name on the teamsheet behind Thiago, and a cornerstone of this side going forward. Averaged 7.74 in 27 appearances, the fourth best at the football club. Getting him for such a low fee (£5.25M) makes this even better. In contrast, Tielemans has been injured with a torn hamstring, only making 10 appearances for PSG for an average rating of 7.24. Definitely a good deal.

I think it sums up how good Thiago is, and how much I expect from him, that I consider this to have been a much worse season for him than last season, and he’s still undoubtedly the best player at Leverkusen with 41 goals and 16 assists in 41 appearances. However, I think his ‘lack’ of form at certain times during the season has largely been my fault. He’s been swapped between the Advanced Forward and Trequartista positions upfront, largely to accommodate Ulrich Isa, and I don’t think this is helping Thiago’s form.  I felt that with his progress last season he was increasingly becoming a more creative player and could play in the Treq role, but this hasn’t continued this season, and it’s confirmed his status in my eyes as an Advanced Forward. As a result, Ulrich Isa (who is now at selling age) will be sold, in order to prevent Thiago’s form declining midway through the season as it did this time. We’re at our best when Thiago is scoring goals for fun, and he does this best from Advanced Forward.

So, where do we go from here? 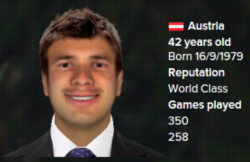 Well, there are yet more changes to come, and there’s a lot of players to move on this summer. Isa, Gaya, Hakan, Kohr, and possibly even Medaglia (who had the best averaging rating this year) will hopefully be sold, to make the most of the money we can get for them at this point, and to lower the average age of the squad. Even Julian Brandt is now 26, and if a good offer comes in for him, I could be tempted. The big clubs are after him.

You’ll probably notice that as this save goes on it’s starting to have a bit of a ‘Moneyball’ feel to it, with me selling players for huge fees, and reinvesting in (sometimes) cheaper alternatives. I’m aiming to make profits with my transfers now, rather than just splashing the cash like I did in the first season, so it should make for an interesting read as this ethos develops.

Things are also going to be changing tactically next season (again). I don’t think I’m going to be able to sign the Number 10 I’ve wanted, and as a result I think I’m going to move to something without an AMC. This isn’t for certain, but I’ll have decided on the new tactic by the time pre-season comes round. I may also do some standalone articles running alongside these save updates where I go through the development of the tactic. Let me know if you’d be interested in that.

So until then, thank you for reading and I’ll update again after the pre-season. If you have any questions, do not hesitate to contact me via Twitter (@JLAspey) or in the comments section of this blog. Thank you again.