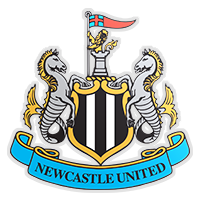 Well, we’ve have reached the end of the first season in the Newcastle United save, so it’s time to update you all on how the season ended. In the previous update, you saw that we were defying expectations and sitting top of the table at the end of the January transfer window ahead of United, City et al, and were well in with a shot at the Premier League title, and Champions League qualification at the very least. I’d also covered the actual signings (or signing) I’d made in the January transfer window, signing Kasper Kusk from FC Kobenhavn – seemingly an FM goldmine for bargains – for £1.8M. All in all, the first half of the season had gone pretty well to say the least.

So, where did we finish? Did we manage to hold onto first place and ease our way to the title, or did we bottle it and give it away, in (almost) classic Newcastle fashion? 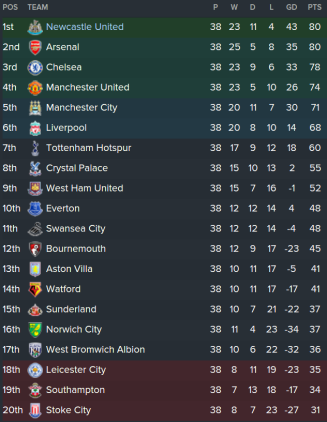 We actually held onto first place, winning the Premier League in the first season.

One quick glance at the table shows you how close the league was, and we only won the league by the benefit of our goal difference, which was significantly better than everyone else in the league, and a full 8 goals better than Arsenal below us. It was one of the closest leagues I’ve ever seen on Football Manager, with several teams still in with a shot until pretty much the last two weeks.

The table doesn’t tell the whole story however. Immediately after the January update, we went on an absolute tear, wining game after game by massive margins, and stretching our lead at the top of the league. Then we went into the crucial last 8 games, and started to throw it all away. We put in an absolutely appalling performance to be beaten 3-0 by Watford, and then laboured to draw 1-1 against Southampton when we had the lead. We then recovered our form and played fantastically to defeat City 1-0 at the Etihad, leaving us with a 6 point lead with 5 games to go. Easy right? Well, that’s what I thought, but it wasn’t to be, and we so very nearly threw everything away. After coming all that way, I really felt like FM was just saying ‘no Jonathon, you’re not having this one’.

We then did this over the next 4 games. We threw away a 2 goal lead at home to Spurs in the space of 5 minutes, drawing 2-2 and losing vital points on Chelsea, United and Arsenal, who had by this point replaced City as the main challengers (with Pellegrini being sacked). We then drew 1-1 at West Brom again after leading, and threw away a 2 goal lead again at home to Liverpool. All this meant that we dropped off the top spot down to 2nd, with Chelsea replacing us at the top. We needed a nice easy game to get us back on track. The Tyne-Wear derby wasn’t really what I’d have liked. However, we finally figured out how to defend again and how to hold onto a lead, and won 4-1 at the Stadium of Light. However, Chelsea and Arsenal both won, meaning that going into the last day were were 1 point behind Chelsea, and level on points with Arsenal in 3rd. Arsenal would play Norwich, and Chelsea faced a tough match against Manchester United. We would play Leicester, who were fighting for their Premier League lives.

We started off well, and took the lead in the 14th minute through Zach Clough after a Kasper Kusk cross (replacing the injured Thauvin) rebounded to him, and he finished well. Just after this goal, news came through that Arsenal had scored against Norwich through Alexis Sanchez, meaning that they would remain level on points with us. We went in at half time 1-0 up, as did Arsenal, and Chelsea remained locked at 0-0 with United. We came out for the second half and scored a second through a Sven Bender header (money well spend thank you Dortmund). Ten minutes later, United took the lead against Chelsea, and although they responded almost immediately, United took the lead again through Depay, meaning Chelsea would drop points. Of course, this was FM and it couldn’t remain that comfortable, and Leicester then scored late on to make things nervy. However, we managed to hold on, and win 2-1, finishing one point above Chelsea, and level on points with Arsenal, but winning the league through our superior goal difference. Newcastle United are champions of England!

It was a season that I never expected for one minute. I knew that squad had real potential when the season began and thought Europa League would be a real possibility, but I never once thought we could win the league. As you all know, at the ends of season I usually do a ‘Best 3 players’ list or some such, and this season will be no different. It must be said that the entire first team were fantastic throughout the season, so this is an extremely difficult list to make. Firstly, honourable mentions go to Zach Clough, Alisson and Ludwig Augustinsson. Anyway, here’s the top 3. 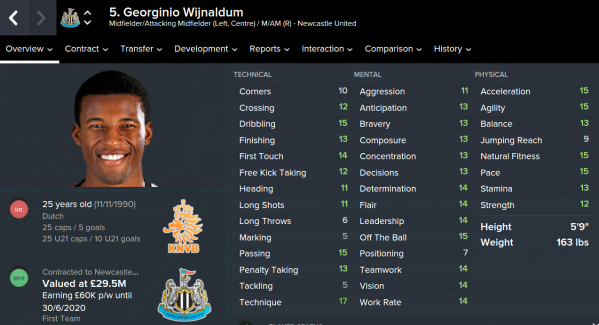 In third place is Georginio Wijnaldum. Wijnaldum starred for us all season out on the left wing in the Wide Playmaker role. He actually ended the season as technically the best player in the league with an 8.14 average rating, perhaps slightly skewed by the fact that he makes a lot of passes that the game considers to be key passes. Nevertheless, he deserves that acclaim, and was fantastic all season, providing a fantastic link between the midfield and the ‘front 2’, and has chipped in with vital goals in big matches. He’s garnered quite a bit of interest now, and I’m not totally sure what I’ll decide to do should bids come in for him. At only 25, he still has plenty of time before he hits the point where I usually sell players (around 28) and has undoubtedly been a fantastic player for us this season. More than deserves his position in the top 3. 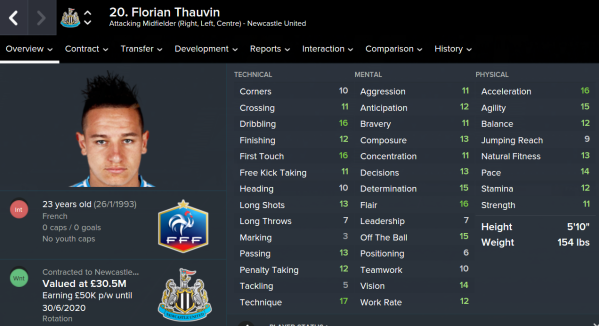 In second place is Florian Thauvin. He has diligently played in the wide right role this season, being a very versatile role, that can sometimes cut inside and attack, but then also go to the byline and put in crosses. He’s excelled in this role, scoring 9 goals and making 10 assists in the league. He would have had more, but was injured midway through the season, and missed the last few weeks of the season again due to injury. At times however, he was absolutely unplayable, and was player of the month earlier in the season when he was tearing opposition defences to shreds. Again, his performances have attracted interest, particularly Chelsea, so I’ll have a decision to make again should a bid come in for him. It could be quite a Summer of turnover, but hopefully I can retain the majority of the squad that took us to the title, whilst moving out some players to allow us to improve 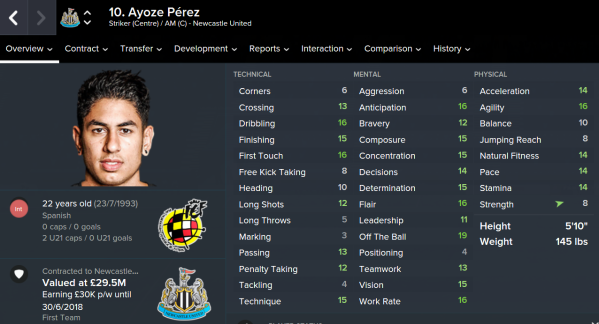 36 goals in 38 Premier League games. A Premier League record. Who else was going to be Number 1? Ayoze Perez’s goals were undoubtedly the main factor in us winning the Premier League. We scored the most goals in the league, and Perez finished a large amount of those. Playing as the lone striker in an Advanced Forward role, Perez thrived off the through balls from Sissoko, Clough and Wijnaldum, sitting on the shoulder of the last defender. He seems to spend a lot of his time offside, but it means that when he does get through rather than being called offside, he’s usually through on goal, and his finishing is so composed that he usually sticks it past the keeper. He’s also a creative threat too with his good vision, and has struck up a fantastic partnership with Zach Clough. I’m hoping I can teach Clough to play one two’s in order to improve this relationship. As with the other two, Ayoze has plenty of clubs after him, but it would take an astronomical fee to take him away from St. James’ Park. Our best player, and the crown jewel of Tyneside as we move onto the second season.

Transfer wise, I only have one already sewn up for next season, and it’s the bosman signing of Real Sociedad goalkeeper Geronimo Rulli. Last year, Rulli was arguably the best young non-regen keeper on the game, and when he popped up available for a free, I simply couldn’t resist.

Alisson has been fantastic all season, and features in my player awards as an honourable mention, but I simply couldn’t resist signing Rulli. As you can see, he’s better than Alisson in terms of attributes, and my plan is to go into next season allowing them to compete for the Number 1 jersey. Whichever keeper does better will stay, and the other will be moved on in the January window, as I can’t imagine either being content with remaining at the club as a backup. It’s very much the Courtois/Cech dilemma Jose Mourinho faced last season, and hopefully it should bring the best out of one of them. If I had to put money on it, I’d say that Rulli wins the battle, but either way, the club wins and makes money out of another fantastic goalkeeper. Of course, I’ll make further transfers (transfers such as picking up the £10M transfer listed wonderkid Julian Weigl from Dortmund – thank you again Tuchel), but this is the only pre-arranged bosman signing.

So, the first season has been pretty successful to say the least, and as I promised (should it continue to work), I’m going to release the 4-4-1-1 that I used throughout the majority of the season. Here is the link to the 4-4-1-1, the tactic that brought me such success this season, and if you have a middle to lower table team in your save, I would highly recommend it. I don’t think it’s quite on the same level as the 4-5-1-0 I used last year with Eibar for teams of that level in terms of sheer overachievement, but I still believe it’s a very effective tactic.

I hope you’ve all enjoyed reading the first season of the Newcastle save, and I hope that the 4-4-1-1 works as well for all of you as it has for me. I won’t lie, I’m starting to have ideas for another save (quite a complex one) that I might end up writing about, but for now, thank you again for reading the first season of this save, and as always thank you for your continued support of The Tactical Annals. Should you have any questions, please feel free to ask in the comments section, or contact me on Twitter (@JLAspey). Thank you again.