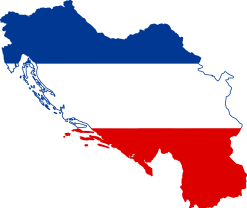 Those of you that know me and know my football writing that I’ve done for the fantastic website These Football Times (I plan to get back to that soon) will know of my passionate interest for East European football. I’m a history geek (and teacher in training) and I’ve always been fascinated by the effect of Communism on Eastern Europe throughout the second half of the 20th Century. One of these effects on East European society was undoubtedly the use of sport as a propaganda tool, and a means of proving that Socialist societies provided better opportunities for their population than Capitalist societies. Football was undoubtedly a sport that was important in this ideal, being the world’s most popular team sport, and I’ve written at length about the effect it had on individuals such as Gyula Grosics from the famous ‘Magnificent Magyars’, the 1954 Hungary side.

However, the nation (or nations) that has always fascinated me is Yugoslavia. Yugoslavia became a Socialist republic following World War II, when Communist leader Marshal Tito took over the country, a country that consisted of Serbia, Croatia, Montenegro, Bosnia/Herzegovina, Macedonia and Slovenia. The country stayed together for decades under Tito’s policy (and somewhat repression) of Brotherhood and Unity, but fell apart in the early 1990’s following his death, as nationalism grew and centuries of ethnic tensions and religious differences blew up, leading to the bloodiest war since World War II, with atrocities being committed, and regions being ethnically cleansed. Amazingly, football is also seen as being the scene of the war’s first battles, particularly the riot that occurred at the Maksimir in 1990, when Red Star’s ultras the ‘Delije’ and Dinamo Zagreb’s ultras the ‘Bad Blue Boys’ clashed, leading to a full scale battle with the Police, and the now infamous kick by Zvonimir Boban on a Policeman attacking a Dinamo fan.

I’m also interested by what’s happened to football in Yugoslavia since the countries split. The quality has largely declined, and whilst the Balkans has remained a footballing factory, producing some of the best players in the world (a quick look at a possible Yugoslav national team will show you), the leagues are simply not strong enough to keep these players around, and they often leave as soon as interest comes from Western Europe, and the sides are left with a financial reward, but little success internationally. It’s easy to forget that in 1991, when the conflict in Yugoslavia was beginning to engulf the country, Red Star Belgrade lit up Europe with their fantastic style of play (and a team consisting of Yugoslavs, except for one Romanian), lifting the European Cup with a team starring players such as Dejan Savićević, Darko Pančev, Siniša Mihajlović and the mercurial Robert Prosinečki. Football in the Balkans has never climbed as high since.

Since the inception of FM16, I’ve wanted to start a Yugoslavian save, but there simply hasn’t been a database available that includes a proper Yugoslav league, and full Yugoslav structure. However, my good friends at @fm_central decided to pick up the project for me, and after much discussion on Facebook and Twitter, it’s finally here and ready to go. The leagues have been combined into one Yugoslavian structure (with 7 levels), and all players from the corresponding nations have been converted to Yugoslavian. Furthermore, a Yugoslav national team has been created. So, it’s now time to start the save I’ve wanted to play for a long time now. I apologise for dropping the Napoli save very quickly (I may come back to it), but I hope you can understand that this is the save I’ve been waiting to play, and hopefully you’ll enjoy reading it.

For those of you who are interested in this Yugoslav database (you really should be), here is a link to it. Once again, massive thanks to @fm_central for creating it. I owe you one, it’s fantastic.

But who am I going to be playing as in this Yugoslavian structure?

Well, who else was it going to be? Yes, I’ll be playing as Red Star Belgrade. Those of you who know me well know that Red Star are my team when it comes to Eastern Europe. I’ve loved Red Star since the first moment I saw them and read about them, and the Red Star team of 1991 might be my favourite team of all time, challenged only by the Barcelona side of Pep Guardiola. I’m a Red Star fan through and through (and a proud one, having watched the 2-1 Eternal Derby win on Saturday), and just couldn’t bring myself to play as anyone else within this structure. I’ve also never played as Red Star before on any edition of Football Manager, so this really is a first for me.

I aim to follow the principles of the 1991 Red Star team, and focus almost entirely on producing and signing Yugoslavians, in order to create the ultimate Yugoslavian team. I will still sign foreign players (even then, I’ll focus on Eastern Europe), but if there is a good Yugoslavian option, I’ll always take it. It’s the same formula I used in the Sturm Graz save on FM15, and I ended up with an almost entirely Austrian side. Hopefully, through the creation of a Yugoslavian side, I can return Red Star to the top of European competition, and also help the Yugoslav national team to perform well in World Cups etc.

I’ll leave details on transfers, tactics and decisions I’ve made until the proper first post, which will be coming very soon. Until then, I hope you’ve enjoyed reading my ‘setting the scene’ post for this save, and I hope you enjoy reading the save itself. I’ve already played a little bit of it, and I’m enjoying it more than any game I’ve had on FM in such a long time. It’s the save I’ve waited years to play. I’ll be back with that post soon, and until then, thank you very much for reading and if you have any questions about this save, or the utterly brilliant Yugoslav database I’m using, then please feel free to contact me either in the comments section, or via Twitter (@JLAspey).