Right, let’s kick off this Red Star save properly then, or Crvena Zvezda to give the club it’s proper name. Oh, and happy 71st Birthday Red Star. For those of you that missed the opening post of this save, I’ll fill you in. If you follow me on Twitter (@JLAspey), you’ll know that I’ve been lamenting the lack of a proper full, in depth Yugoslavia database for FM16 for quite some time now, having presumed one would be created by someone after the game’s release.

If you’re familiar with the writing I’ve done for websites such as These Football Times, you’ll know that I’m absolutely fascinated by East European football, and Yugoslavia in particular. I’m particularly interested in football’s role as a force for nationalism and unity in the Balkans, and also the effect that the war and the breakup of Yugoslavia had on football in Serbia, Croatia, Bosnia/Hervegovina etc. So, after much moaning and complaining on my part, my good friends over at @fm_central have taken on the project and created an absolutely brilliant Yugoslavia edit, which you can find here. So I’ve loaded it up, and chosen my team from Eastern Europe, a team I’ve loved ever since I first read about them and watched them play, Red Star Belgrade. 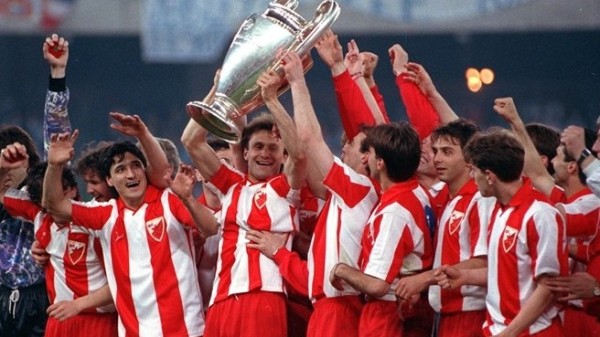 This picture above is Red Star’s greatest moment, winning the European Cup in 1991, defeating Marseille in Bari on penalties. The team is littered with great names of Yugoslavian football (and football in general), names such as Robert Prosinečki, Siniša Mihajlović, Dejan Savićević, Darko Pančev and Miodrag Belodedici. I will openly admit that I love this team (so much so that I wrote an article on them), but they are more than worthy of this praise I give them. However, the last time that Red Star even made the group stages of the Champions League was in the 91-92 season. It’s time to rectify that, and return Red Star, and football in the Balkans, to its rightful place at the top of European competitions.

The very first thing I did when I joined the club was look at the coaching staff. Red Star are renowned for producing their own players, and I wanted to ensure that we had the best staff possible. I brought in a new assistant manager, and a new Head of Youth Development, amongst others. It’s an often forgotten element of starting a new save, but this is an important step to make in the early days. Any potential weaknesses (for example, I found a physiotherapist with a physiotherapy stat of 9) can be eradicated early on.

I then started looking through the squad, assessing where Red Star’s strengths lie, in order to assess what kind of tactic/formation I’m going to employ. What is evident, is that we have a bunch of talented young Yugoslavs in the squad. 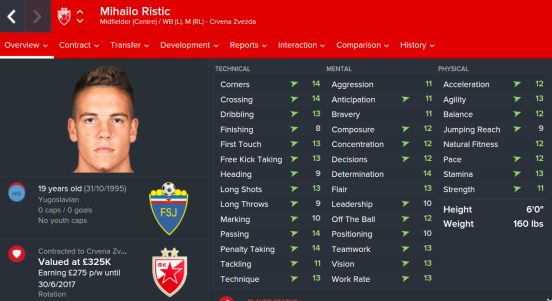 Mihailo Ristic is the main prospect. At only 19 years old he has a fantastic range of attributes, and has the ‘all round skill set’ I like players to have. He’s also very versatile, and can play on the wings, as well as being capable at wing back. However, I see central midfield as being his best position, and I plan to make him a central part of the tactic that I’ll be employing. I’ve had larger clubs around Europe sniffing around him already, but I’ve managed to put them off, and he hasn’t had his head turned just yet. Progress in Yugoslavia already. 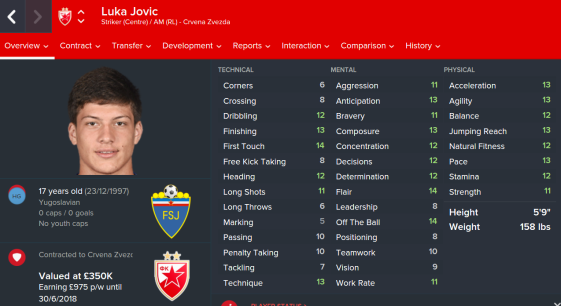 Probably the most obvious prospect at the club is the well known wonderkid Luka Jovic. I started this save before the recent data update released by SI, and therefore Jovic is still at Red Star, rather than at Benfica. At only 17 years old, his attacking stats are quite frankly ridiculous, and he’s got a lot of room to develop. He’s started off the season fantastically too, and hopefully he can be the Pančev for this side going forward, and lead the line for us throughout the Yugoslav league season.

Another young starlet is midfielder Marko Grujic, who is now well known for having signed for Liverpool in real life. Again, because I’m playing before the transfer update, he’s still at Red Star. You can see his quality at only 19, with the ability to play almost any role in midfield. I see him as a deep playmaker, controlling our play from deep, before giving the ball to players such as Ristic and Jovic higher up the pitch and allowing them to create. I see the trio of Grujic, Ristic and Jovic as being the cornerstones of the club moving forward.

That isn’t even all the young prospects. There’s Vukasin Jovanovic, Slavoljub Srnic and Srdjan Plavsic in the first team (I haven’t shown them all because I don’t want to overload you with screenshots), and below that there’s a bunch of talented young players in the reserves and under 19’s, although they’ll obviously take more time to develop than players like Ristic and Jovic. We may have less established players than sides like Dinamo Zagreb or Partizan, but in 2 or 3 years time, I’d guess that our squad will be just as good as theirs, if I can hold onto to these young stars, as well as producing Yugoslavs through the youth system.

However, there were a couple of obvious weaknesses in the first team, so I delved into the transfer market with the £420k I was given as a budget. I felt that we needed strengthening (as well as an injection of youth) at centre back. I also needed a replacement for Savo Pavicevic, who joined LA Galaxy in the MLS for £21k.

Therefore, I signed Yugoslavian Jevrem Kosnic on a free as a rotational option. I don’t think Kosnic is necessarily a long term option at centre back, but he will be a good back up option to the first choice pairing of Jovanovic and Rendulic, and hopefully will give them some competition for first team places. He’s another with an all round skill set, and the only stat that worries me is his ‘9’ for decisions. Other than that, he can head, tackle, mark and pass, really all I need my defenders to do. He’s also a former Red Star youth graduate, beginning his career in Belgrade. 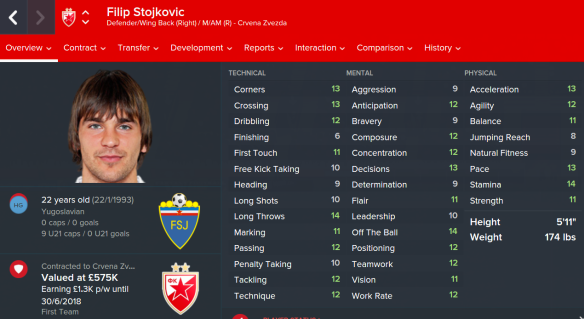 However, by far the biggest issue was right back, with the club only having one proper recognised right back in the first team. I was looking for a backup option to Marko Petkovic, but failed to find someone actually good enough to be a backup at Red Star, and therefore decided to try and upgrade the position, and signed Filip Stojkovic for £400k from Čukarički. Stojkovic is young and Yugoslavian, and was highly recommended by my scouts, who told me to sign him ‘whatever the price’. He’s hit the ground running in his early games for the club, and like Kosnic, is also a former Red Star player.

This analysis of the squad and the signings I’ve made have shaped the development of the tactic I intend to use this season, and it’s a switch to a style I’ve been wanting to use throughout FM16, but simply haven’t been able to get working. I’m going back to my favoured narrow football. 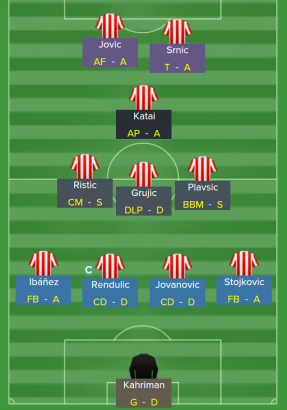 Here’s the tactic to the left, a 4-3-1-2. It’s an FM16 version of the diamond I developed last year with Leverkusen, a tactic that I loved. It also has elements of the asymmetric 4-3-1-2 I used with Leverkusen prior to the diamond thrown in there.

The reason I’m using a 4-3-1-2 rather than a diamond is that I feel that with a standard diamond, the AI can too easily outflank the ‘two’ in central midfield, utilising the wings before either crossing, or moving the ball back into the centre, when the midfield two have attempted to press out wide. With a midfield 3, this is somewhat negated, and the formation has more natural width to allow us to cover the flanks. With a central CM that will drop deep, the formation will still provide a diamond-ish shape, although there might not be as much depth with a DLP-D at CM as there would be at DM. However, the increased width more than makes up for that in a defensive sense.

The early signs from the 4-3-1-2 are very good. We crashed out of the Europa League in the qualification stages, being very unlucky in drawing Serie A side Sampdoria in the latter qualification rounds. We gave a good account of ourselves, going down 1-0 in the first leg (a game Samp were extremely fortunate to win through a penalty), and then losing 2-0 in Italy. Still I’m not disheartened by that. No Europe this season allows us to focus on the Yugoslavian Premier Liga, and qualifying for Europe properly. Furthermore, it allows us to focus on developing the fantastic prospects we have at the club, without having to worry about over-rotating the side for European competition.

Not a bad start to the season.

I’ve only played one game of the season proper, but as you can see above, it was an extremely tough fixture against Dinamo, who are expected to finish first this season. Dinamo played a wide 4-3-3, so it was a nice test to see how the 4-3-1-2 would really cope when it came up against a team who wanted to use the flanks. Dinamo also have some fantastic players such as Marko Pjaca, Marko Rog, Arijan Ademi and wonderkid Ante Coric (although he never made it off the bench), so this was a really tough first game.

However, I needn’t have worried, as we swept them away 3-1, with Jovic and Srnic causing havoc upfront, Ristic playing fantastically in midfield, and the defence keeping Dinamo’s fast strikeforce at bay. The 4-3-1-2 worked beautifully, and we never looked threatened when Dinamo moved the ball out to the wings, even when it was Pjaca who got the ball. The 3-1 really was deserved, and it was a fair result. However, I’m not getting carried away just yet. My objectives for the season are to qualify for Europe, develop the young players, and assess where I can improve the squad with Yugoslavians moving forward. The media only predicts us to finish 5th, but I know we can do better than that.

I’ll update again at the mid-season point, but until then, that’s all I can update you on in the Red Star save. I’m absolutely loving it so far, and I’m sure I’ll fly through the first half of the season until the next update. I hope you’re enjoying reading this new save, and as always if you have any questions about Yugoslavian football, the database I’m using, Red Star, tactics, or even just FM16 in general, please do not hesitate to ask in the comments section, or via my Twitter (@JLAspey). Thank you again for reading, and this save will be back soon!