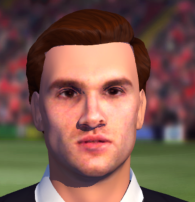 Right let’s get started. 3-1-4-2 DM. In case you didn’t read the last update, I’ve joined the Community Formation Experiment over on the Sports Interactive tactical forum. The premise of this challenge/experiment is simple – formations don’t matter. In theory, base formation’s aren’t important. It’s the interpretation of those formations that makes the difference, and they can all be interpreted in many different ways, and in the end they all become unique. The challenge is to take whatever formation you draw, and turn it into a viable tactic.

I randomly drew 3-1-4-2 DM. That’s a back 3, a defensive midfielder, a midfield 4 and two strikers. An interesting formation with plenty of challenges, but definitely not one of the most challenging formations. There’s some horrible base formations in Football Manager if you take the time to look. All members of the experiment are also required to play as Sassuolo in Italy. This update will cover the first observation I did of the tactic I drew up as a first draft, and what positives and negatives I saw in the tactic’s first match against OGC Nice of Ligue 1 in France.

For reference, here is the tactic I’m kicking off with. If you have any questions about the tactic itself, please feel free to ask. Any details on why I chose certain roles are in the previous update.

So first things first before I dive into the in-match analysis, here is an overview of the game. I love this new post-match report feature. You can get a bunch of information from this little report.

Firstly, we won 1-0 which is nice, with our CM-A Lorenzo Pellegrini getting forward – a good sign already – to score in the 39th minute. We absolutely dominated the ball with 63% again proving the theory that using the lower risk mentalities like counter and defensive can lead to high possession statistics without the need for shouts like ‘retain possession’. I’m not really looking for a possession hungry tactic, but I’m not adverse to it either as long as we create chances. Another glance shows that our biggest passing connection was from the Regista to the CM-A, a really good sign. This shows that we’re being able to advance the ball through centre midfield, from our playmaker Sensi to our most aggressive attacking central midfielder. Pellegrini also made the most key passes in the side, showing he’s being a clear threat when he gets forward.

Another glance will show that we only managed 3 shots on target, which is not good. However, in 90 minutes, Nice only managed one, showing that we may well be doing something well defensively. 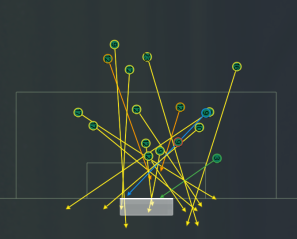 A deeper look into the shots we took – 17 during the game – shows that actually our profligacy in front of goal may have been our issue – a slightly worrying issue – rather than having any issues with the shots we’re taking using this tactic.

As you can see by the yellow arrows, there’s a fair amount of them that have simply been missed, and there’s two orange arrows that have been saved. Plus, the majority of the shots are in and around the box, and therefore are in good positions to score. I’ve told the side to ‘work the ball into box’ so this should be expected. However, it’s pleasing at this early stage to see that there isn’t a load of long shots, suggesting that the players have options when attacking, and aren’t reduced to simply hoofing it towards goal. However, you can see here that we’ve created plenty of chances, we just haven’t finished them. Let’s hope this doesn’t continue to be an issue, or I’ll be begging for Berardi to come back early.

So now for the in game images – how did I feel everything looked?

Well, this is a screenshot I took straight from kick off – I always do this to see how the base shape looks in game. We can see that the back 3 looks good, the Regista is deeper than the midfield 4 but is looking for the ball, and he’s well connected to the rest of the midfield. The defensive wingers are also in close proximity to the Nice wingers should we turnover the ball and need to get back into defensive shape quickly. The only issue I could see from this image was that the two strikers initially looked quite isolated from the rest of the side – something I would need to keep an eye on throughout the rest of the game.

So far, I’m very happy with the shape of the team when we get into attacking positions. Here you can see Magnanelli (playing Regista) with the ball, with plenty of options ahead of him. The Defensive Wingers have pushed forward, and we’ve ended up in a 3-3-4 shape. This would normally be an issue, but we’ve pushed Nice so far back that we can more than cope with our back 3. It’s also a shame there isn’t some kind of CD-S role in FM17 à la Azpilicueta at Chelsea, because there’s a bunch of available space for the LCB to advance into and cause overloads. At this point, I’d decided to make the change and push the defensive line higher up, and as you can see, the connections between the team are far better. It also compresses the space, and makes a counter attack far less likely.

Speaking of counter attacks, what was our defensive shape like?

Well, the fact that we held Nice to only 1 shot on target through the whole game suggests that we did something right defensively. Above you can see our shape, with Nice moving the ball out to their right flank. Our defensive winger has gone out to close down Pereira, and therefore we’ve moved into a pseudo Back 4. The shape itself is nice and compact, and we’ve got 7 men behind the ball, something I’m very comfortable with – those that read this blog will know I’m unashamedly defensive minded. However, what eventually resulted from this move was a cross that caught our defensive winger on the right flank napping, leading to a slight chance for Nice. It was the only time during the whole match that I was ever unhappy with our defensive work. Other than that, we were comfortable, compact and dominated the available space on the pitch. Tactically, you cannot compensate for a player losing focus and allowing a winger to make a run into the box. Still, I am very happy with only one shot on target against a very decent Ligue 1 team.

So in the (very) early going, this 3-1-4-2 DM is looking pretty promising. I’ve now added the shout ‘push higher up‘ after this game, and I’ve also included my usual goalkeeper personal instructions (something I stupidly forgot for the first 10 minutes of this game). As you can see above, everything’s still fairly basic for now, but the tactic is developing. I don’t think it’s anywhere near perfect, but as a baseline I’m very happy with the initial version of this tactic. The only irritating thing is that Defrel was injured in this game, meaning I’m down to Iemello and Matri as a strike partnership until Defrel and Berardi return.

I also need to consider any possible transfers. I can make two permanent ones and one loan deal, and I need to assess where I think the team is weak. At the moment, I’m thinking we need depth in central midfield (and I have a brilliant potential cheap option there) and potential improvements at defensive winger.

I’ll update again at the start of the Serie A season in order to show you any changes I’ve made until that point, but for now thank you very much for reading and as always, should you have any questions about FM17 or this tactic in particular, then please feel free to leave them in the comments section or contact me on Twitter (@JLAspey). Thank you again.