So, those of you that follow me on Twitter (@JLAspey) will have seen that The Tactical Annals is back, and I’m finally back playing Football Manager. I apologise for my inactivity lately. Those of you who know me well will know that I’m currently in my training year to become a teacher, and through the school term I really struggle to find the time to play FM properly enough to write about it. I’ll have the odd dabble with old saves, but I don’t want to revisit any of those on this blog months down the line when you’ve all lost interest.

However, I’m now back with a fresh new save for the blog, and I’m going somewhere I’ve never really managed before. As you can probably tell from the title of the article, I’m in Scotland, north of the border. Beyond the wall. I’ve only ever managed briefly in Scotland before with Falkirk in FM13 (I think?) before this blog even existed, so it should be a fun save to explore Scottish football in Football Manager. I also have to credit Iain Macintosh, Alex Stewart and Matt Stanger for making me take notice of Scotland in the game again via the FM17 Project. 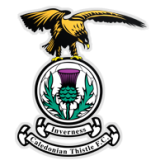 So, who am I playing with? Again, those of you that follow me on Twitter will already know, but I’m in the Highlands with Inverness Caledonian Thistle. Why Inverness? Well, they were predicted to finish mid table in 6th in the first season, so it provided me with a nice challenge, and I also really like their logo. Who needs deep reasons to manage a club on Football Manager? As so often happens on FM though, I’m starting to quite like Inverness. I’ve already played the first season of this save, so we’ll be starting from Season 2, but I’ll quickly go through what happened in Season 1. 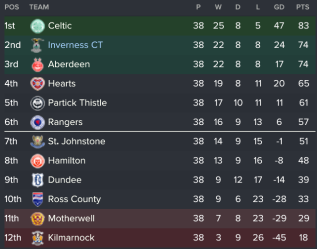 Well, we finished the full league season in second place, blowing our 6th placed prediction out of the water. Celtic were never ever threatened and comfortably took the title by 9 points – although we remained unbeaten against them – and it was a three horse race for the remaining two placed in European competition. It doesn’t look like it, but Hearts were right there with us and Aberdeen until the last few matches. Much of the credit for our amazing season must go to this tactic that I developed, a sort of 3-4-2-1. It sits deep, provides plenty of defensive cover with a Back 3 and 2 DM’s, and looks to work the ball forward carefully and patently. However, I moved away from the 3-4-2-1 in the last few games of the season, but I’ll cover that later. It worked absolute wonders against Celtic, drawing against them three times and beating them once at home. It really struggled throughout the season against Aberdeen and Hearts however, and I feel the team can afford to be less defensive this season with the improvements in players. Player wise, most of the credit should go to loan signing Jordan Williams, playmaker Greg Tansey and free signing striker Blaz Sujica, who scored 25 goals for the season. I desperately wanted to sign Williams, having agreed a £425k fee for him with Liverpool, but after I received the Season 2 transfer budget, I knew this was impossible. He’s sat on the transfer list at Liverpool for £1.2M as I write this. I miss him.

So, Season 2 – the difficult second album – can we repeat the heroics of the first season? As I said above, I believe the first key step is to develop tactically. Last season, the 3-4-2-1 worked wonders, and we played some incredibly solid defensive minded football. However, against Hearts and Aberdeen we really struggled, largely due to their excellent wide play, and our increasingly slow wing backs (with single digit attributes for pace and acceleration). As a result, I decided that we needed to switch to combat this threat, so I switched a 4-4-2 diamond that you can see on the right with a FB-D, CD-C and a BWM-S all on the side that Aberdeen and Hearts were most threatening – and our weakest flank. Unfortunately, I only decided to make this switch 1-0 down at half time against Aberdeen, but we came back to level the game at 1-1, before a last second penalty gave us a defeat. However, with the diamond installed full time, the last three games of the season were all won to secure us 2nd place, with a comfortable 2-1 win over Rangers on the final day.

Because of the solid performances of the diamond towards the end of the season, I want to bring it into this season and see if we can convincingly make it our Number 1 tactic. The 3-4-2-1 will remain, but as we get better and our reputation increases, I really think Celtic are the only team we should be using it against. However, it will probably make an appearance in the Europa League should we make it through a decent way in qualifications. It’s unbelievably solid defensively, but it’s not a tactic we will be using in 5 years time.

The squad has also improved considerably moving into this season. I feel I’ve used the shoestring budget I was given pretty damn well. Free transfers and the transfer list have been my friend, as I’ve only spent £115k in total. First in were Ben Killip from Norwich, Adam Barton from Partick Thistle, Keith Watson from St. Johnstone and James Keatings on a free.

In the next batch were goalkeeper Viktor Noring from Hearts, full back Bob Harris from Bristol Rovers, centre back Dejan Kurbus from USV and attacking midfielder Graham Carey from Plymouth Argyle. Only Noring cost anything at a measly £7k.

Pre-season has been pretty plain sailing, and the diamond has had an extensive run out in all matches, save 45 minutes of experimenting with a 4-1-3-2 against H&W Welders – the greatest club name ever – which didn’t work as well as I’d hoped. It’s performed excellently, and has clearly resulted in wins as you can see above. We efforltessly defeated Alloa, AaB from Denmark and H&W Welders. It then travelled back to Denmark in the first round of our attempt to qualify for the Europa League against moneyballing legends FC Midtjylland. We comfortably dominated the ball against them both at home – helped by Tim Sparv getting himself sent off – and in Denmark, and came away with a 5-2 victory on aggregate, and even that flatters them because we conceded a last minute penalty in Denmark. I was beyond proud of my imaginary players, and it just goes to show how much the club has improved in a short amount of time.

Of course, we then came crashing back down to Earth against English League 2 side Morecambe, a match that I played twice as the result of my computer crashing midway through saving the game – and I didn’t have a backup. Yes, I was worried the save was gone. The first play through we lost 2-0 with a heavily rotated (quite frankly rubbish) side, and the second time when the game was holidayed, we drew 1-1. Clearly my assistant is better than I am. We then travelled to Kazakhstan – no Borat jokes – to face Kairat, and beat them 3-0 in extremely comfortable fashion with Keatings scoring a brace. The only problem was this match was a mere three days before the beginning of the Scottish league season, and I played a full strength lineup. I tried to take as many key players off as I could to rest them, but I fear St. Johnstone will take advantage of the classic FM European hangover in the opening game of the season.

Nevertheless, we enter the beginning of the 2nd league season of this save in very good shape, and looking like we might just have an outside chance of making waves in Europe. Expectations wise for this season, I simply just want to consolidate our position. I don’t expect to finish 2nd again, but I would definitely like to finish 3rd, qualify for Europe again, and continue to bring in the money that will help the club press on and eventually rival the Old Firm in terms of money and wages. Updates for my saves are going to return to the old format, simply to allow me to play more often and not have to keep updating, so until January – in game, I promise – thank you very much for reading, and should you have any questions about this save, Football Manager 17, or anything in general, please feel free to contact me either on Twitter (@JLAspey) or in the comments section of this blog. Thank you again.