I told you I’d be back didn’t I? Well, I’ve completed the first season of our good friend Julien Girard’s career, managing Sporting Club de Schiltigheim in the Alsace region of France, neighbouring the German border – hence the Germanic club name. We’re in the Championnat de France Amateur 2 – D, and we’ve played one roller coaster of a league season. Those of you who have read the first update will know that things started off really badly for Julien, with tactical confusion, and only one win in his first seven games as a manager. However, Julien eventually managed to turn things round, discovering a counter attacking 4-1-2-3-0 strikerless formation that garnered an upturn in form, leaving Schiltigheim 3rd in the league table after 13 league games played, level on points with FC Metz Reserves, but 5 points off US Sarre-Union at the top of the table.

The rules of the CFA2-D are that the champions progress directly to the Championnat de France Amateur, but 2nd placed finishers go into a playoff to determine who will be promoted from the various regional leagues. So things had clearly improved, but we weren’t home and dry yet, and I was still only expected to finish in the top half, even when I was offered a new contract by the club, keeping me contracted in Schiltigheim for an extra year. Of course, this is all despite me being given good odds to be sacked by the press. Thanks. Oh, and the club helped me out by paying for Julien to attend a training course, so Julien now has a Continental C License. This left Julien’s attributes looking like this at the end of the season, but more on that later.

So, things had been steadily improving until the mid-season break, how did Julien fair in the second half of the season? Did Schiltigheim manage to make that push for promotion to the Championnat de France Amateur?

Well, as you can see above, our good form continued throughout the second half of the season. We continued to pick up wins, apart from draws at home to Pierrots Vauban and away to 4th placed AS Nancy Reserves. I’d also largely converted the 4-1-2-3-0 to a ‘control’ mentality, as our confidence grew and teams began to treat us differently. Whilst this record looks to be consistently good, so were the records of US Sarre-Union and FC Metz Reserves, save poor results in the week before the final day of the season. Our bore draw with FC Metz in the penultimate week meant that we went into the final day only in 3rd, on 49 points, with FC Metz Reserves one point ahead on 50, and US Sarre-Union on 52. Sarre-Union would face ASC Biesheim, and their horrible Sweeper 3-5-2, and FC Metz Reserves would face Sarreguemines FC, who sat in the relegation zone, already relegated with nothing to play for. Things didn’t look good. We were set to face FC Lunéville, a lower table team. I went into the match day hopeful, but knowing realistically we were going to be in the playoffs at best. However….

Yes. Little Sarreguemines, with nothing at all to play for, beat FC Metz Reserves with goals through Quere and M’barki, meaning that they would remain on 50 points for the season. If we beat FC Lunéville, we’d be in the promotion places, and at least have a shot at promotion. However, we conceded a penalty in the first five minutes, and Lunéville converted it, leaving us 1-0 down. But then….

……then this happened. Yes, ASC Biesheim and their horrible little 3-5-2 with a defensive sweeper took the lead against Sarre-Union in the 74th minute. I’ve hated playing them this season, but suddenly I found myself quite liking them. However, Sarre-Union then quickly equalised through Guillin, meaning that they would comfortably be promoted as champions of the Championnat de France Amateur 2 – D. Football Manager wasn’t done messing with my emotions though, because then Bisheim retook the lead in the 90th minute through Victor Mayard – I don’t know who you are Victor, but I think I love you – meaning that if we could recover against Lunéville, stop messing around and choking, we’d be guaranteed to enter the promotion positions. Not only that, but our goal difference was getting very very close to that of Sarre-Union’s. Surely we couldn’t….

Well, we did it. We came back to win 3-1 with a penalty of our own through Mathlouthi, a curled shot from Genghini and a tap in from our star signing Marco Rosenfelder – set up by our other signing Julien Fuchs – that sealed the win. However, we also ended up with a goal difference of +17, one more than Sarre-Union on +16, so by goal difference, a comeback win, and a 90th minute winner from a relegated team, we are champions of the Championnat de France Amateur 2 – D and have achieved automatic promotion to the Championnat de France Amateur. I’ve never experienced a final day on Football Manager quite like this one, jumping from 3rd place and out of the promotion places before the start of play, to ending the day champions and automatically promoted. All in all, these are the results from the final day of the league season.

Our AMC Rosenfelder taps in to make it 3-1 against Lunéville to win the league for us on goal difference. 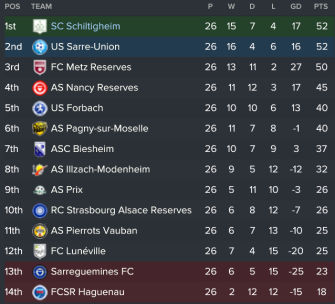 By the end of the season, this was the full table. As you can see, we finished level on points with Sarre-Union, but won the league based on the goal Rosenfelder scored above to give us a 3-1 win and +17 goal difference. We ended the season with the best defensive record in the league with only 14 goals conceded across 26 games. It ended in dramatic fashion, but this was massively assisted by our shocking start to the season of 1 win in 7 games, before eventually finding our feet with the 4-1-2-3-0.

Our player of the season has to be Loris Ieraci, who provided an amazing goalscoring threat from central midfield as the CM-A in our system, and consistently popped up with important goals. He controlled midfield, linked the midfield to the attacking trio, and in our system is asked to run beyond the AM-S at AMC, and exploit the space created by our winger staying wide. Ieraci also had an uncanny knack of arriving late in the box to tap in crosses from the wide players, much like Frank Lampard circa 2005. He ended the season with a 7.18 average rating, which is pretty high for this level (3rd overall in the league).

Honourable mentions must also go to Marco Rosenfelder and Julien Fuchs, the two players I bought in towards the end of the first half of the season. Fuchs ended the season with a 7.14 average, and contributed to the success of our midfield, along with Ieraci. He hit the ground running as soon as we signed him, and he was excellent in the Box to Box role that provides real energy to the midfield 3. Rosenfelder was much slower to get going, rarely averaging above 6.8/9 for some time, but really contributed towards the end of the season, scoring several times in important moments, and scored the all important goal that gave us the league crown.

However, all of the team must be praised for their performances. The defensive unit as a whole were incredible, and led to our keeper Stéphane Schneider recording 12 clean sheets through the season. By the end of the season, my first choice lineup was:

The important question now is what next? As you can see above (also linked at the top of the article), Julien’s attributes have improved throughout the season through his Continental C License coaching course and his general performance. Furthermore, Julien’s reputation around football has rocketed up as a result of Schiltigheim’s performances, going from 5% to 25%. As a result, there is a team in the Championnat National – two levels above the Championnat de France Amateur 2 – that are becoming interested in Julien, and there’s a good chance I’ll go for the job, as I feel it would be the right move for his career. I don’t think things are working that well financially for Schiltigheim, and they’re not a long term project for Julien. I’d rather leave the job in the close season, and allow a new manager to come in and build the team for the step up to the Championnat de France Amateur, than leave during the season and have a manager be forced to stick with my squad – without strikers.

This is also the reason I stayed at Schiltigheim until the end of the season, rather than attempt to go for some jobs in the division above. I don’t think it’s what Julien would have done in his first season when Schiltigheim were doing well and gave him his first job.

I should also mention that I’m going to take some of the events that occur in this save into account when making decisions. One thing that I think will be taken into account is the difficult start that Julien faced, and his tactical chopping and changing to find something that would keep him in a job. As a result, I believe this makes Julien more pragmatic, and less tactically idealistic, more focused on finding a formation and a system that works for his players, rather than a Pep Guardiola approach. This shift is reflected in his in game coaching style being referred to as ‘defensive’.

So, that brings us to the end of the first season of Julien Girard’s career as a football manager, and the end of our first season with Sporting Club de Schiltigheim. Until next time, thank you very much for reading, and as always, should you have any questions to ask regarding this save, the ideas behind it, or FM17 in general, please feel free to ask in the comments section of this blog, or contact me via Twitter (@JLAspey). Thank you again, and I hope you’ve enjoyed reading the first season of this save. I’ll be back soon with another instalment, possibly at a new club.