Well, FM19’s beta is here, so I thought I would do a quick article which will outline what I’ve been doing so far tactically. I’ve been playing my beta save with Arsenal – who are always fun on Football Manager – a team who I’ve played with before on previous editions of FM. They’re usually a very good beta team as well if you want to figure out what works on the latest edition of the game, and what you’re going to use tactically because they have a large amount of players in various positions. Before I start as well, I’ll say that so far I really, really like this year’s game, and some of the changes that have been made are very good, and there are some – like training – that I’m still looking forward to diving into. Bravo SI, bravo.

Of course, on this year’s version Arsenal are slightly weaker than in years past. They no longer have Alexis Sanchez, who was a vital plater for me back when I played as Arsenal on FM17, but they do still have Mesut Özil, and also possess relative new signing Pierre-Emerick Aubameyang, who I’m very much looking forward to using. There’s also Lucas Torreira, a fantastic new midfielder that Arsenal have signed. All in all, once again, Arsenal look really fun to use on FM.

Spoilers: I’m very tempted to just make this my permanent save, because it’s been so enjoyable so far.

One thing I must also note before we get started is that I haven’t made any transfers so far, in a rush to get playing proper Premier League games, so if I get there, this might make for a nice squad building post at a later date, much like my Arsenal post from FM17. Anyway, on with the tactics. Those of you that have read my articles before know that I have a strong preference for narrow formations, preferably anything that forms a diamond shape in midfield, as I focus on controlling the centre of the park. This has worked well for me on most editions of Football Manager, save for FM16 – aka Crossball Manager.

This is the system that I am currently using, a 4-3-1-2, my preferred formation. I have utilised the Vertical Tiki-Taka preset tactical instructions, but tweaked them slightly as you can see to the left of the image. So far it has us sitting 3rd in the league after 7 games, with our only dropped points being a 3-2 comeback loss to Spurs, and a 1-1 draw to Chelsea when Leno decided to clear the ball straight into Hazard, leading to a tap in for Pedro in the 88th minute after we dominated the game (65% possession). It has us 2nd best in the league for goals scored with 14, and 4th best in conceded with 7 – most against Spurs.

Defensively, this is how the system looks. As you can see we are sitting very narrow, and have a small gap between our last man and our highest man – the kind of structure that Arrigo Sacchi and Marcelo Bielsa have always strived for in their tactics. As a result we have compressed the available space that West Ham have to play in, and you can see our movement towards the ball – and passing lanes – from how I’ve tracked our pressing from the white circles to the red arrows. What’s more, you can also see from our front 3, that should we win the ball, and be able to evade any possible counterpress from West Ham, then we’re 3 against 3 in the centre of the park against their system. In the end we went on to win this game 3-2, after several odd decisions by my defenders leading to goals for West Ham. Fortunately Mesut Özil and Danny Welbeck – who has taken Lacazette’s place in the team shockingly – combined to win the match for us. When we have the ball, this is our usual shape. As you can see we control the centre of the pitch extremely effectively with our diamond shape, and the ball is regularly moved rapidly from midfielder to midfielder, making it extremely hard for the opposition to win the ball back from us – hence why we have the largest average possession in the league right now at 61%. We also have a spare man at the back should we be countered so we’re safe in this respect despite throwing quite a few men forward, and because we’ve sucked the opposition into the centre of the park because of our narrow system, the WB’s on our flanks are in acres of space, which Bellerin usually uses to full effect – I genuinely think he’s the best RB on the game, and has been for several years. 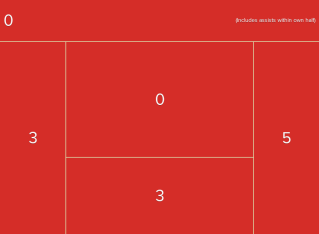 Tactically, there are still improvements that can be made. We don’t give up many goals at all, but it appears that the majority of the goals that we do concede are from our right hand side – 5 assists have come from there in total. Now this brings into question the performance of right back Hector Bellerin. However, when we look at statistics, we need to take the whole picture into account because that solely appears as if Bellerin is costing us goals, when in fact when we take into account the assists that we create, 11 of the assists for our goals are coming from his flank – and are largely because of Bellerin himself. His average rating of 7.24 suggests that his performances are a positive. My two first choice centre backs however, Mustafi and Sokratis, have average ratings of below 7 at this point, so their performances must come into question.

In terms of our average positions, you can see that we tend to position ourselves fairly high up the pitch, and although we’re structured as a 4-3-1-2, it’s really just a diamond. We have a really good shape, and one that allows me to play the brand of football I want, with quick progression of the ball and circulating around the midfield. Another important fact to mention is that I have been playing Alex Iwobi as a Mezzala in central midfield, and he’s been fantastic so far, average 7.17 and really driving the ball through midfield when needed and committing defenders as the Mezzala should. I’d encourage anyone managing Arsenal to try it. 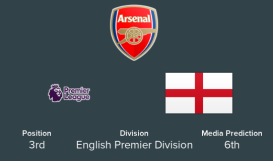 So that’s what I’ve been using so far on FM19, and it appears to be going fairly well so far. It certainly isn’t perfect, but it’s a framework from which I can build. I’m almost set on what I want to do this year, and just need some edits to become available for the game in order to properly begin. So until then, thank you very much for reading, and as always, should you have any questions regarding my plans for this year, my 4-3-1-2, or just Football Manager in general, then please don’t hesitate to ask either in the comments section of this blog, or on my Twitter (@JLAspey). Thank you again.