Ok, so we’re back again. I said in the last post that I would update this save every time I thought something major happened that was worth discussing, and it already has. I’ve often said that I think one of my strengths on Football Manager is my ability to quickly build a very strong squad that can compete on a domestic and continental level. Obviously, this is somewhat easier for me having played FM for such a long time, I largely know the players who are good buys every year – although I do try to mix up the players that I sign on each version of the game.

This article will cover the winter transfer window in my first season with Arsenal. The winter transfer window is always a banana skin for your season, because one missed step can quickly turn a positive season into a negative one, so you need to be aware of how things are going before making any rash decisions. As you saw in the last update, my Arsenal currently sit top of the table as a result of the switch to the 4-4-2 system, and by the time we had reached the transfer window, we had extended our lead at the the top of the table to around 9 points following a 4-0 drubbing of Liverpool – with Lacazette scoring all four – even with Mkhitaryan and Özil injured. The main thing about being that far clear at the top, is that I can afford to be relatively aggressive with the moves I make, knowing I have a buffer down to what became Manchester United in 2nd.

There are two key objectives you can use the winter window for. These are:

Now obviously, the position your club is in has a massive impact how much you can focus on these things. If you’re in a relegation battle and need points now, you’re not going to be focusing on the second bullet point half as much as the first – although too little focus on the future can quickly end up in the Sunderland effect, where you slowly slide down the leagues. In my situation, I am able to focus largely on the second point.

As I mentioned in the last update, I had already arranged for the transfers of Matthijs de Ligt and Kieran Tierney before the transfer window itself – it’s always better to have your business done ahead of time. However, there are always opportunities to be had in the transfer windows that you can exploit to improve your team. Before the window, I’d also realised that we had a natural weakness at striker. Yes, Pierre-Emerick Aubameyang and Alexandre Lacazette are both fantastic strikers and are certainly top class, but after them, there’s really just Danny Welbeck, who is 28 and good at best. As a result, I need to sign another striker to give me four in total, and one who ideally young and very promising.

In comes Moise Kean from Juventus for £15m.

Therefore, I signed Moise Kean from Juventus for what will eventually amount to £15m. I may have overpaid slightly initially, but I know from experience that Kean turns out to be one of the best strikers in Football Manager in recent versions of the game – however, I’ve never actually signed him before. For now, he’ll work fantastically as a rotation option for Lacazette and Aubameyang, but eventually he will progress to being the first choice striker. He’s already proved to be a good buy, scoring 2 goals in 2 games, the second being an important 71st minute goal to give us a 1-0 lead against Watford. One buy, one success. Another step that I then made later in the transfer window regarding strikers was to promote an extremely promising youngster in youngster Eddie Nketiah to the first team, meaning that I can now set Danny Welbeck and his £125k per week wages for release at the end of the season. So at striker, we’re now stronger this season, and we’ll be stronger next season as well.

The next step was to make some decisions regarding contracts that I’d let run down, particularly Aaron Ramsey. I wanted to re-sign Ramsey, but he’s only been a rotation option for me this year and so I wasn’t willing to give him a large contract. I offered him a rotation option contract with a £90k a week contract – going up to £100k at the most – which he turned down, wanting between £130k and £140k a week – which I just wasn’t willing to pay. As a result, I decided to look for a replacement rotation option for central midfield – crucially, someone who would accept a lower wage and squad status than Ramsey. I then went to the transfer list screen – which has been improved this year, as I’ve ruthlessly exploited the transfer list market in previous years – and looked for a signing.

Chelsea’s Danny Drinkwater joins us from the transfer list market.

As a result, I found Danny Drinkwater transfer listed at Chelsea, available for a measly £6.5m – pennies in today’s footballing climate. Drinkwater compares well to Ramsey – only really being worse at dribbling – and crucially was willing to accept a lower wage of £87k per week, and a rotation status for his contract. As a result, Drinkwater was signed, and provides us with excellent cover for the CM-S and DLP-D roles in the 4-4-2. This means I can now try to sell Ramsey (although he’s turned down both Newcastle and Lazio currently) and at least make some money rather than let him go on a free. Another signing, another win. Drinkwater was also willing to take a 3 year contract, whereas Ramsey wanted a 5 year contract. So again, that’s a win.

I also made a few other sales in quick succession, with Petr Cech and Granit Xhaka leaving the club, to Manchester City and Monaco respectively, because they wanted more game time. I then sold Nacho Monreal to Shanghai SIPG because he simply wasn’t going to get any game time behind Tierney and Kolasinac. I made one further signing in the window, that was forced on me.

I’d been tracking Celtic’s Kristoffer Ajer for quite some time as I believed that de Ligt and Ajer would be our centre back pairing for the future, and when news came through that Tottenham had made a £27.5m bid (with future incentives) for his services, I decided to make the same move, and ensure that he became an Arsenal player for the next 10 years, rather than a Spurs player. To make my bid more attractive than Spurs’, I decided to offer more upfront cash eventually offering £38m. Celtic accepted the bid, and after I offered him £82k per week, he accepted our offer rather than Tottenham’s, based on our relative positions in the league. This is a move I didn’t necessarily want to make now, but Spurs forced my hand. Nevertheless, this leaves us extremely strong at centre back, and I have my young core for the future in Ajer, de Ligt and Rob Holding. This did however, leave me with a surplus of defenders, and as a result I needed to let one of Mustafi, Koscielny and Sokratis go. Sokratis is the oldest of those options, and as a result, I decided to move him out of the club, selling him to Barcelona for £17.75m, which admittedly was less than his value of £22m, but I needed to move Sokratis out in order to avoid issues with players not getting game time.

Johannes Geis will join us for next season as well.

My last move of the transfer window was to bring in our first Bosman signing for next season in Johannes Geis. Geis isn’t quite the player he was a few versions ago, but he’s still a more than talented player, and I’ve brought him in to be a backup to the DLP-D role that Lucas Torreira has made his own. He’ll complete with Mohammed Elneny – a player I’m quite fond of – to be the first choice backup. With this final move, my transfer window ended – although I will be continuing to look for Bosmans over the next few weeks.

So, have I managed to hit my key objectives?

Well, the squad is very well prepared for the second half of the season. We’ve improved considerably upfront, and we have even more depth in central midfield. In addition, we’ve also improved at centre back, having two young stars at the heart of our defence, along with other excellent centre backs such as Mustafi and Koscielny. We’ve also improved extremely well in terms of the future. We have two excellent young strikers to build around in Kean and Nketiah, and we’ve become much younger in defence, with our first choice backline now being:

The oldest player in that lineup is Bellerín at 23. So, along with the other young players already at the club such as Iwobi, Guendouzi and Torreira, we now have a young core to build around for years to come, to ensure that we can build a new dynasty at the Emirates and return Arsenal back to being a linchpin of English football. 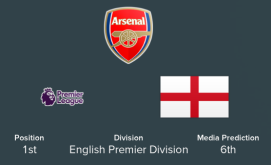 Admittedly, I’ve been able to be very aggressive here because of the success we’ve had in the first half of the season, but having a clear plan for improvements, spotting your weaknesses, and reacting to what the game gives you is something that is applicable to everyone playing Football Manager when you approach a transfer window. I hope that this article has shown you my thought processes as I progressed through the window, and has lessons that can be taken from it. So until the next update, thank you very much for reading, and as always, should you have any questions regarding my plans for Arsenal, my transfers moving forward, the 4-4-2 system or just Football Manager in general, then please don’t hesitate to ask either on my Twitter (@JLAspey), or in the comments section of this blog. Thank you again for reading.