Right, time for the main event, it’s time for the 2018 World Cup in Russia. In the last update, I covered our path towards the World Cup, and left some hints towards my plans for die mannschaft moving forward. I also revealed the squad I would be taking to the finals, and here it is again should you wish to have another look. In my own esteemed opinion, I think it’s quite a brave squad to take, with a large amount of young players such as Jonathan Tah, Julian Brandt, Julian Weigl, Kai Havertz and Willi Orban. Of course, these players are still extremely capable products of the Talent Development Programme™, but it’s still more risky than simply including all the old-timers from the 2014 tournament in Brazil – then again, look what happened to Jogi Löw.

In case you missed the last update, here is the group that we’ve drawn for the tournament, a pretty easy route through to the knockouts in Japan, Switzerland and Nigeria. I’m expecting comfortable wins against Nigeria and Japan, with Switzerland probably being our only real challenge there. Realistically, anything other than going through as group winners just isn’t acceptable, even if I’ve forced the squad into something of an early transition period. 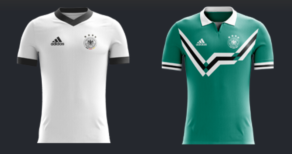 Our beautiful new kits for die mannschaft, created by the fantastic @FMAcidphire2185.

In the last update, I suggested that I was looking at using the 4-1-2-3-0 system for the finals themselves. It served us well in its only real test throughout 2018 against an Italy side that had the sheer audacity to play The Box™ against me, and we came through the game decently. However, in the final few friendlies before the tournament itself, I began to feel that it wasn’t working as effectively as I’d hoped, and Mesut Özil wasn’t having the impact on games that I thought he’d have as the Trequartista from AMC. However, I went into the first game against Japan with the 4-1-2-3-0 with this lineup:

We then proceeded to be shocking in the first half, barely creating anything of note, and giving Japan far too much respect. I switched to a 4-3-3, moving Werner up front and playing Götze on the flank, but this improved little. An attempt at using the 1990 inspired 3-5-2 did little either, so at around 60 minutes, I brought on Julian Brandt and switched back to the 5-2-3 that had served us so well in qualifying in 2017. Only a few minutes later, we took the lead through Brandt playing as the left playwinger™ setting up Götze playing as the right playwinger™ to nod in at the far post. However, disaster struck in the 71st minute when Joshua Kimmich went off with an injury that has left him out for the rest of the tournament. As my most promising young player and one of the first players on my teamsheet, I was gutted to lose him.

Joshua Kimmich goes off with a torn groin, leaving him out for the rest of the world cup. Crap.

The other problem with this, is that I’ve made an error in my squad selection, not really having a proper alternative to Kimmich. I was kicking myself once I realised. As a result, I was forced to move Emre Can out to play the right wing back role, and brought on Jonas Hector to play the BWM-S role in midfield. Yes, he’s not a standard CM, but he’s been fantastic in that role for us so far. Maybe there’s another mistake, in not taking Khedira, but in all honestly, I don’t feel like he’s missed at all. Hector then went on to smash the ball into the top corner from the outside of the box in the 88th minute, to give us what eventually looked like a comfortable win. However, another irritating factor was that Leon Goretzka was also injured, and may be fit for the last 16.

After that, I decided that it was time to go with the 5-2-3 for the rest of the tournament, and we can live by it or die by it. Our next game was against Switzerland, the team we were most likely to face any trouble from. I decided to go with this lineup:

The players responded, and more than vindicated my decision to switch to the 5-2-3. Julian Brandt and Timo Werner upfront were particularly fantastic, with Brandt getting an assist, and Werner scoring 2 of our 3 goals – the other scored by Boateng – in a 3-0 win. We controlled the ball well with 59% possession, and had a healthy ratio of shots to shots on target.

The next game was against Nigeria, and a heavily rotated team – learning from you there Gareth – closed out the group stages with a 1-0 win and a 100% record. Lovely. To go through as group winners is hardly an achievement, we’ve just done exactly what would be expected of us, even if we’ve set a national record. The real challenge comes now with the knockout rounds. In terms of our best performers so far, here are our current top scorers etc. The only outlier there is Özil, who only played in the match against Nigeria as a playwinger™, and wasn’t fantastic. Werner’s really started to hit form though, and Brandt has secured a place in the starting lineup simply through making important plays and creating something out of nothing on several occasions. I think that Götze, Werner, Brandt will be my chosen front 3 moving forward, but Götze hasn’t been quite as good as Brandt, and therefore may end up dropping out should he not perform well next game.

Star striker Timo Werner smashes in our second goal against Switzerland, becoming our top scorer in the process.

Speaking of the next match, you’d think that with us finishing top of the group, we’d have a nice simple Last 16 game right? A nice little warm up as we make our way comfortably through to the Quarter-Finals?

Wrong. We’ve got Spain. I’d been keeping an eye on the other groups, and realised that we were set to draw either Brazil or Spain as the 2nd placed team from Group G. In the end, Spain finished second by virtue of what appears to be less goals scored. Spain haven’t looked massively impressive so far, but this is certainly going to be a difficult game. Winnable for sure, but difficult. That game will form the next update of this save, as I’ll now move to doing one game per post for the knockout rounds. Hopefully I can write several of them. So, until then, thank you very much for reading, and as always, should you have any questions about this save, or just FM18 in general, then please don’t hesitate to contact me via Twitter (@JLAspey) or via the comments section of this blog. Thank you once again.