Well, football season is back – thank God – so it’s time to preview the 2018/19 NFL season for the team from the Windy City, the Chicago Bears. Much has changed for the storied franchise since Week 17’s 23-10 loss to divisional rivals the Minnesota Vikings, that concluded a disappointing 5-11 season – good enough for the 2nd worst record in the NFC. As the season ended, so did John Fox’s three year tenure as Head Coach, with the organisation bringing in former Chiefs Offensive Coordinator Mike Nagy as Head Coach. Nagy is expected to finally get the once great franchise moving again, twelve years after their last Super Bowl appearance. Nagy has since moved quickly, bringing in his own staff in Offensive Coordinator Norv Kubiak and Defensive Coordinator Ryan Charles. Nagy is expected to give both coordinators a lot of independence on their respective sides of the football, and will involve both men heavily in the scouting and drafting process. Coach Nagy has stated his reasoning behind this approach when asked by reporters:

Really, it’s just a part of our process. We’re aware we have work to do, and this is the way we’re going to do it. I trust Norv and Ryan’s judgements, and we’re going to get better working as a unit.

In terms of Norv Kubiak’s offense, Kubiak will be expected to improve on last season’s offensive ranking of 30th, including being bottom of the league in passing yards. Quarterback Mitchell Trubisky will be expected to make strides forward in his second season with better pieces around him such as Trey Burton, Allen Robinson II and Taylor Gabriel. Bears fans will be looking for that yardage total through the air to rise up through the NFL rankings. The Bears certainly have some solid pieces on Kubiak’s side of the ball, with a talented young running back combo in Jordan Howard and second year Tarik Cohen to compliment the pieces on the flanks. One lingering question this season will be over the offensive line, and whether they can protect Trubisky enough to allow him to find his weapons. Clearly there is much to do, but Kubiak has proved confident in his playing staff:

I think at the end of the day we have to play to the strengths of this team and this offense. I’ve got full faith in Mitch, I know we’ve got a really strong backfield and a nice receiving corps. Of course there’s still work to do and improvements to be made but I’m very happy with our preparation and have total confidence in this offense to deliver this season. So, I’m not going to give everyone our gameplan obviously but we will be playing to the strengths of the key components of our offense and I think Bears fans should be excited to see what we can deliver on game day.

Defensively, Ryan Charles inherits a talented playing staff that ranked 10th overall in the NFL last season, so Charles’ job is perhaps easier than that of Kubiak. Charles is known for his love of the blitz and his utilisation of ’46’ – yes, that fabled number – concepts, and many Bears fans are hoping to see elements of that system back on Soldier Field. Charles also has the responsibility of utilising the Bears’ 1st Round pick, Middle Linebacker Roquan Smith, who has the speed, tackling and the coverage ability to be a top linebacker in the league – if he can overcome questions about his size. A potential concern is that top safety Adrian Amos Jr. enters this season as the final year of his contract, but sources close to the team suggest that the front office remain confident of retaining Amos. The biggest question marks on the defensive side this year will be the interior on the line, and at corner, where Kyle Fuller and Bryce Callahan will be tasked with shutting down the opposition receivers. Aaron Lynch also needs to return to the standard of his early performances for the 49ers. When we caught up with Charles at camp, he seemed positive about the defense’s progress thus far:

I think we’re looking good. We’ve introduced some new concepts to the guys which they’re adjusting to, but they’re coping well. They ran a 3-4 system last year and we’ve moved away from that, but my basic concepts remain. We’re gonna’ play aggressive, smart and physical defense. Roquan’s really impressed me so far, and Adrian appears to have adapted really well to what we’ll be asking of him this year. We’re working to what we’re good at, and I think everyone that comes to Soldier Field will be in for an experience on our side of the ball this year.

In advance of the pre-season games against the Bengals, Broncos, Chiefs and Bills, Coach Nagy and his staff also made three key acquisitions. Firstly, full back Freddie Stevenson was re-signed, having been allowed to leave by the former administration in 2017. It is believed that Kubiak sees full backs as having an important role in his running game, perhaps a throwback to a bygone era. On the defensive side of the ball, defensive end Johnathan Hankins was signed from free agency. Hankins played for the Colts last season, and can play both defensive end and tackle if required. With Jonathan Bullard the only real option on the right side of the defensive line, a fair prediction is that we’ll see Hankins and Akiem Nicks as the edge rushers in Charles’ system this season.

However the biggest decision made by the Bears front office this pre-season was the decision to trade middle linebacker Danny Travathan. Travathan was traded to the Miami Dolphins along with a 7th round pick for offensive lineman Ja’wuan James – who enters this season in the final year of his contract – and a 2019 6th rounder. Some elements of the Bears faithful weren’t entirely pleased with the decision to trade one of the team’s top players, but it provides Kubiak’s offense with a key lineman required to protect Trubisky, and frees up the MLB spot for Roquan Smith to sink or swim in the NFL. What’s more, closer analysis of Travathan’s two seasons in the Windy City also shows a declining amount of games started. 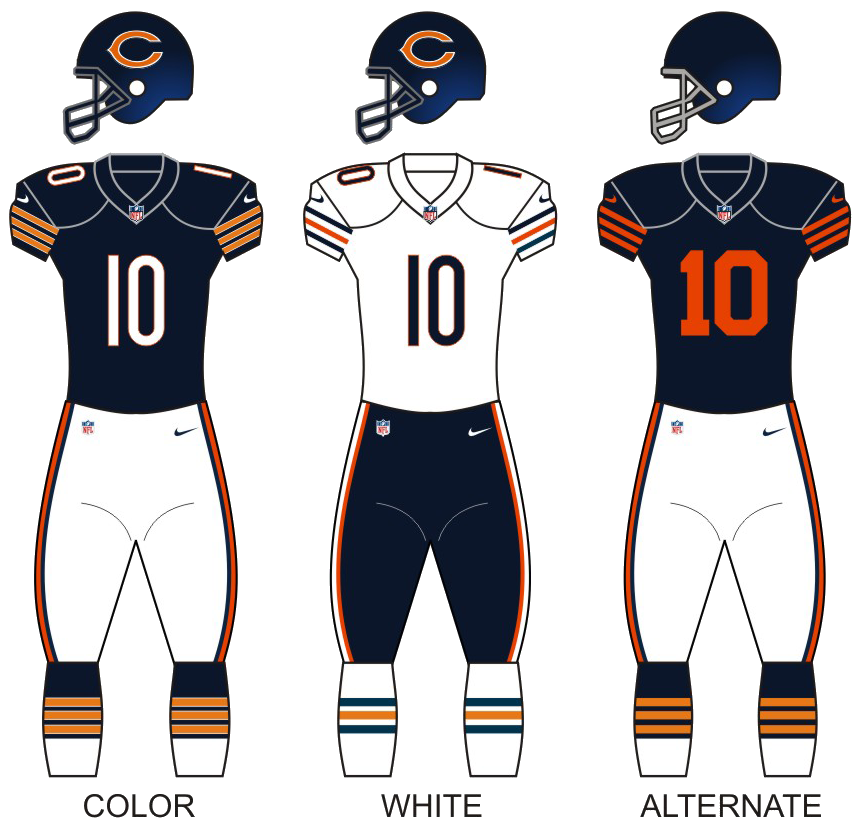 Old faithful. The Bears uniforms for this season – and most.

When it comes to the pre-season itself, the Bears were up and down in terms of results. They began their pre-season against the Cincinnati Bengals – another team that will be hoping for improvements this year – and came away from Ohio with a 14-12 victory. However, the Bears then followed that good performance up with 3 straight losses to the Denver Broncos (19-13), Kansas City Chiefs (44-20) and the Buffalo Bills (45-17). Whilst Bears fans likely wouldn’t have expected the team to defeat the Chiefs, the difference between the two teams was astounding, and the defence just gave up far too many points, plain and simple. On top of that, the performance against the Bills was poor across the board, and that simply cannot happen in the Regular Season. However, what was really highlighted by this year’s pre-season is the worrying lack of depth that Chicago have, and this is something that Nagy and his staff will need to address quickly either through trades or the draft, because whilst the Bears may get away with it for one year, it will certainly catch up with them. Most games saw the Bears doing well through the first 2 quarters, before being blown away as their reserves came in, with the offense turning the ball over with Chase Daniels under centre, and the defense failing to do much of anything against the opposition offensive line.

Still, there is plenty of reason to be optimistic for the Bears faithful. Trubisky showed hints of development from last year in his limited outings – connecting well with new addition Trey Burton – and when the ‘1s’ were on the field, offenses struggled to move the ball against the Bears’ defense – although with some of the team’s more aggressive blitz packages, it was clear that the Bears may be open to the big play. In terms of personnel, Nagy and his staff didn’t have many difficult decisions to make over the pre-season, and below is our prediction of what the starting lineups will be on offense and defense in week 1 for #DaBears against their divisional rivals the Green Bay Packers:

Mitchell Trubisky finds TE Trey Burton for the score against the Broncos in Week 2 of the pre-season. Expect to see this connection a lot this season as the offense looks to improve from last season’s poor showing.

Roquan Smith, Adrian Amos and Akiem Hicks close in on Patrick Mahomes out of the 46 formation in Week 3. The 46 looked promising with the ‘1s’ and should give QB’s a nightmare this year as the Bears look to become a top level defense in the NFL.

Now, it’s time to move on to the Regular Season for the 2018 Chicago Bears. Week one sees the Bears face the Packers and Aaron Rodgers at Lambeau Field, in what will certainly be a big test of Nagy’s staff, and how the Bears perform on offense and defense under Kubiak and Charles. We’ll have coverage of the opener posted immediately after the game.